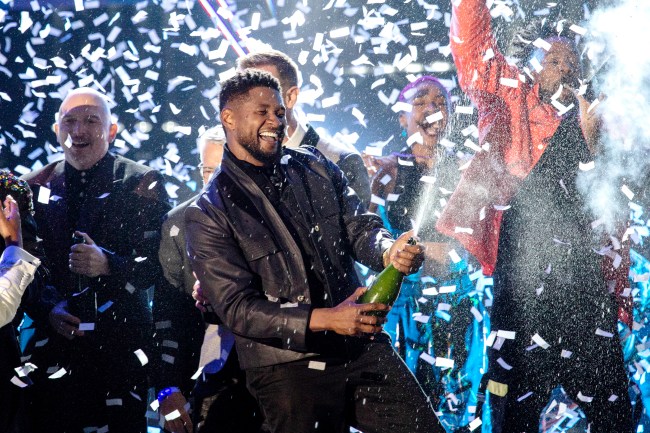 Usher found himself in a bit of controversy over his latest visit to a Las Vegas strip club.

Over the weekend Usher and his entourage made their way to Sapphire Gentlemen’s Club where the R&B superstar was accused by a stripper of making it rain with fake bills with his face on it.

The owner of the strip club spoke to the Las Vegas Review-Journal and said that Usher spent a lot of real money at the club but also threw up the fake bills for fun and some of the dancers were confused by the whole thing.

“The $100 bills created a lot of excitement, because they look so much like real bills. But this wouldn’t have created a problem, except some of our entertainers tried to cash them in at the cage where we make all of our transactions,” Feinstein said. “That’s when the pedal hit the metal, so to speak. But he also left a lot of real money, bought a lot of ‘Dance Dollars,’ which we do create and use in the club.”

The “Dance Dollars” are exchanged for actual cash, and the dancers then turn them in for their night’s pay. From what they tell me, anyway.

According to TMZ, sources close to Usher claim someone in his entourage left behind the fake bills as a joke to promote the R&B singer’s upcoming Las Vegas residency.

Now for some more intel on what the hell actually happened here — sources close to Usher tell us that somebody in his crew (not him) left some stray Usher dollars behind on the stage as a bit of a gag … both to be joke-y, but to also promote his new Vegas residency.

The owner of the strip club says has no beef with Usher and claims the R&B singer promised to return to the club to “make things right.”

The owner says Usher will amend the chaos that ensued. Feinstein said the superstar is promising to return to the club “to make things right” ahead of the opening of his residency, which is July 16. Sounds like a preliminary plan for a post-show party.

We’ll have him back in the club, and we would love to host him again,” Feinstein said. “He was a gentlemen, and he spent a lot of money in here. It was just an unusual party experience.”