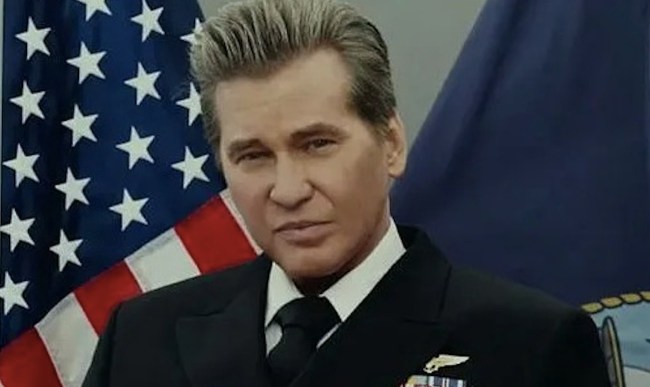 One of the biggest stars in Hollywood in the 90s — he played Batman, after all — Val Kilmer’s career has wained in recent years as the 62-year-old actor battled throat cancer and lost his voice as a result. The excellent 2021 Prime Video documentary Val, which features tons of footage shot by the Tombstone star himself, does an incredible job of chronicling Kilmer’s life and career.

Despite his difficulties with speech, though, Kilmer appears in Top Gun: Maverick, reprising his role as LT. Tom “Iceman” Kazansky. As we reported on last Summer, Tom Cruise essentially demanded that Kilmer return for the sequel, telling famed producer Jerry Bruckheimer that we “have to have Val back.”

That return was made possible thanks to the use of an artificial intelligence program — something that the Val doc touched on towards the end — that was able to recreate Kilmer’s voice.

“In the end, we generated more than 40 different voice models and selected the best, highest-quality, most expressive one,” John Flynn, CTO and cofounder of Sonantic, said in a statement. “Those new algorithms are now embedded into our voice engine, so future clients can automatically take advantage of them as well.”

“After cleaning up old audio recordings of Kilmer, [Sonantic] used a ‘voice engine’ to teach the voice model how to speak like Kilmer. The engine had around 10 times less data than it would have been given in a typical project, Sonantic said, and it wasn’t enough. The company then decided to come up with new algorithms that could produce a higher-quality voice model using the available data.” [via Fortune]

There’s no denying that having Kilmer return for the wildly successful and instantly beloved sequel was the right call, as Iceman is not only as crucial to the original Top Gun as Maverick was, but it allowed for a genuinely emotional scene between the pair and a proper sendoff for the character.