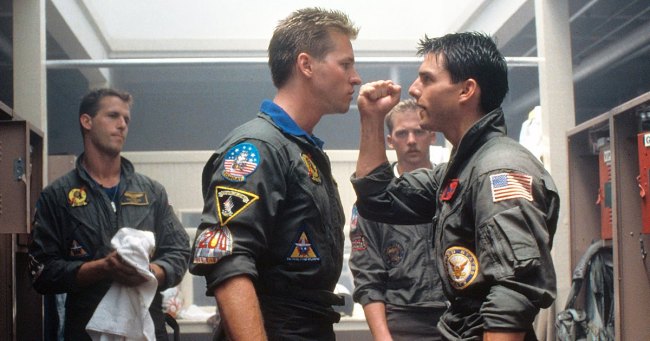 What an absolutely fascinating character Tom Cruise is. On one hand, he totally seems like a self-aggrandizing egomaniac (See: viral rant from earlier this year at the crew of Mission: Impossible 7, among many other things throughout his four-decade-long career). But on the other, he can also come off as a genuinely thoughtful, kind dude. Perhaps Cruise is proof that those two things can co-exist. Today, we have an example of the latter.

As you’ve probably heard — hopefully by way of the genuinely spine-tingling trailer — the long-awaited sequel to Top Gun, Top Gun: Maverick, is set to hit theaters on November 19 (finally, as it was *originally* scheduled to release in 2019!). Cruise won’t be the only character from the legendary original to return, though, as 61-year-old Val Kilmer will be joining him as LT Tom “Iceman” Kazansky.

Now, while you may have heard of the Top Gun sequel, I won’t fault you for potentially being unaware of Kilmer’s recent past, which I certainly was until I watched the excellent documentary Val on Amazon Prime. Following a throat cancer diagnosis, Kilmer went through a procedure on his trachea that has reduced his voice to a rasp and rendered him short of breath. While he’s now cancer-free — and has been for the last four years — he’s unable to speak without plugging the hole in this throat from the procedure and eats through a feeding tube. Despite this, though, Cruise was adamant that Kilmer appears in the sequel, with producer Jerry Bruckheimer saying that he was the “driving force” behind it.

He continues of Kilmer, “He’s such a fine actor, and he’s such a good individual. We had such a good time on the first one and wanted to bring some of the gang back together again.”

Just earlier this month — mere days after Val was released — Sonantic, a United Kingdom-based software firm that clones voices with A.I., unveiled their recreation of Kilmer’s voice, which he will be able to use both personally and professionally going forward.

“My voice as I knew it was taken away from me. People around me struggle to understand when I’m talking. But despite all that I still feel I’m the exact same person,” Kilmer says in the video, which uses entirely A.I.-created voice.

“Still the same creative soul. A soul that dreams ideas and stories confidently, but now I can express myself again, bring these ideas to you, and show you this part of myself once more. A part that was never truly gone. Just hiding away.”

Now, given that Top Gun: Maverick was filmed all the way back in 2018-2019, it’s unlikely that this technology will be used in the film, so it’s going to be fascinating to see how they incorporate Kilmer’s Iceman into the story.