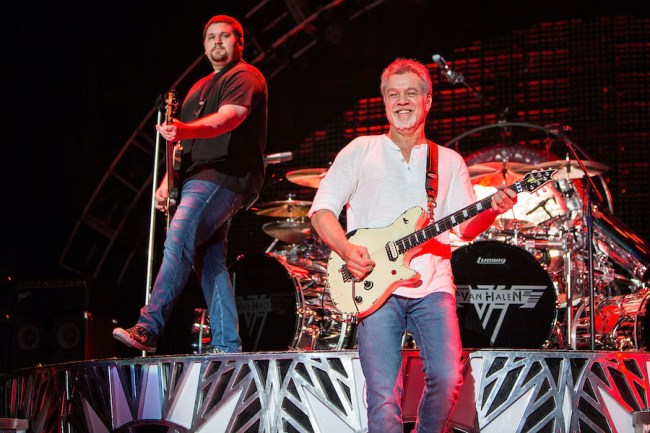 Scammers didn’t wait long to take advantage of his death by attaching Van Halen to a bogus story about his use of CBD oil.

Eddie’s son and bandmate, Wolfgang, got wind of the ruse. He’s attempting to shut it down immediately and requesting fans to harass the company.

According to Van Halen News Desk, a website dedicated to Van Halen band news, the article attributes fake quotes to the late guitarist and claims to be published in People magazine.

Here’s a portion of the fake article:

While many might not be aware, Eddie Van Halen died of throat cancer. He didn’t like to talk about his struggle with the disease, but he did chime in on the healing properties of CBD Oil and the warmth that its calming effect provided the last months of his life.

“When I got my diagnosis, I was devestated. And when you’re a rock star, there’s this pressure to never show a sad side. My manager pointed me to CBD oil, which I admit I was skeptical of. Sometimes these alternative medicines sound like a bunch of mumbo jumbo, but I was blown away by the results. I never knew something natural could have such a powerful effect.”

The Eddie’s Foundation is rolling out Eddie’s own CBD Oil for the masses. The Foundation’s pledge is to send one free bottle to anyone who is in need. All they ask is fans pay for the shipping fee.

Wolfgang got wind of the scam and posted on his Twitter and Facebook pages to warn fans the entire article is bullshit and explaining the article isn’t from People, so don’t focus the hate on the magazine.

Hey, so I’ve gotten enough messages about this shit so I figured I’d do my best to shut it down.

This CBD oil thing claiming to be some final gift from my dad is all bullshit. Just another batch of soulless fuckers taking advantage of this horrible situation just to make a quick buck off naive fans. Fucking assholes.

Also, before people start attacking People Magazine, it’s not actually an article from them. This CBD oil company (?) is using it as a template to scam people.

If you DO happen to know the people behind this, by all means harass the shit outta them. You have my blessing.

I don’t normally post as much on here, but these scams have been originating HERE on Facebook and spreading like crazy. This shit has got to stop.

Don’t be an idiot. Don’t buy this shit.

Also if you’re one of the leeches selling this sh*t, f*ck you and have an awful day.

Also, before people start attacking People Magazine, it’s not actually an article from them. This CBD oil company is using it as a template to scam people.

If you DO happen to know the people behind this, by all means harass the shit outta them. You have my blessing. https://t.co/PMeS10ydXj