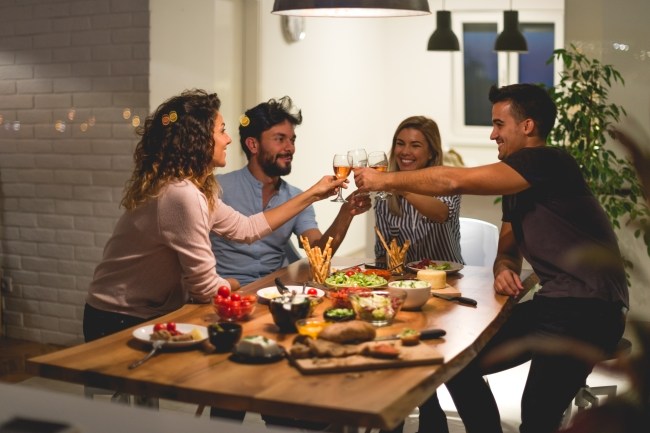 I spent this past weekend at a shared AirBNB in some small town near Woodstock, NY. It was my girlfriend’s group of friends, and they’re all a few years younger than me—27ish, I think. Who knows, you’re not supposed to ask people their age anymore. I’m 31, and I thought big share house weekends were a thing of my past. At some point in life, you can’t take those conditions anymore. You know what I’m talking about: half-deflated air-mattresses on the floor of the unfinished basement; wet, rotting towels saturated in beer under the pong table; toilets clogged with flowering panoplies of toilet paper; an inexplicable hole in the drywall measuring about the size of Tom’s loafer; sticky kitchen floors, sinks piled high with late-night pizza plates, and not a clean fork for miles; a complete disregard for recycling, with the trash can stuffed with solo cups. Stains, stench, fatigue, regret.

The drive home is both a relief and a breathing exercise. No amount of air-conditioning will suffice as you hyperventilate between heart palpitations. Work tomorrow. Need to shave. Skin looks like you betrayed Putin. Stop at a gas station and puke in the bathroom. Thank God for Seamless and weed.

That’s the state I was in when the Venmo requests started raining down like hellfire. In they came, blocking out the sun, like those swirling machines in the worst of the Matrix movies. For as we all know, once the first Venmo request is sent to the group, the floodgates open. It becomes a race for everyone involved to balance their debts to zero. No expense it too small; no contribution too minimal. Throw it all in there, for God’s sake. Let’s. Get. Petty.

Couple things: don’t send Venmo requests on Sunday night. Don’t do it. That’s terrorism. Wait a few days. Let the charges settle. Let our bowel movements return to firm. Grant me a salad, a workout, and a call to my mom before you come collecting. That’s just Venmo etiquette 101.

Secondly (and this is the point of this story), grow up. At some point, you have to start adhering to the “it all comes out in the wash” theory, at least to a degree. Big expenses—like if you took down a group restaurant bill—are totally fair game. Of course. If you spent a few hundred bucks at the liquor store on behalf of the house, absolutely ding me for it.

But there’s a line. There’s a bar. And I’ll show you just how far this group limbo’d under that bar.

Couple notes: they use the app Splitwise. It’s a good app, if you’re into that sort of thing. It helps itemize purchases and split them evenly between those who partook in consuming those purchases. I personally hate the app because it never comes out in my favor. But I’ve selected a few choice items for which I was asked to contribute. I blurred out the names because this is exactly the sort of thing I’ve gotten in major trouble for in the past—making fun of real people.

Every couple was assigned a meal to cook for the house. We had breakfast on Saturday morning. My girlfriend crushed it—she made two homemade quiches, a couple jugs of fresh green juice, and individualized yogurt parfaits with homemade granola. I know, I know, I’m going to marry her, relax.

It’s important to note that we had no intention of charging anyone for the supplies that went in to making our meal. We just figured that everyone would cover their own costs, and since every couple had a meal to make, it would all come out even. Boy, were we wrong.

THIS couple was assigned a dinner, and they made dumplings. Apparently, these dumplings called for a trip to the “Japanese grocery store.” I don’t even know if that’s a real place but it feels racist. Their groceries totaled a whopping $14.29, which they then split across 10 people. That division doesn’t work out evenly, so some had the privilege of paying $1.42 while I was hit with the full $1.43. That’s not fucking fair. More importantly, if you spend $14.29 and expect 10 people to chip in on that, and you’re not homeless? You’re going to have trouble keeping friends in life. Just saying.

These charges came from the same person actually, in case you couldn’t tell. The first thing that boils my blood is the effort at fun labels: “nonstop food” and “dranks.” This is no place to be cute. Don’t piss on my face and call it a “showah!” What’s more, you are charging me, and 8 other people, for $52 of liquor. That’s like one bottle of wine and a case of beer. Do you know how sober we’d all be if we split that booze evenly? For the same reason that I’m furious with Mr. Japanese Grocery Store, I’m mad at Ms. Dranks. WE ALL BROUGHT BOOZE. WE ALL BROUGHT FOOD. ADD YOUR SHIT TO THE POT AND MOVE ON.

There are many other charges like this that aren’t worth editing the names out of because you get the idea. Needless to say, my thumbs are sore from denying dozens of $3.24 and $1.68 charges. I refuse to pay that little. It’s almost not worth the phone data it costs me from my wireless carrier, and I have unlimited data.

Here’s the deal: at some point in life, you have to stop keeping score at this microscopic level. You are literally nickel-and-diming people, and that is the correct use of “literally.” Again, big charges are totally fair. Use your discretion. But let’s be fucking adults, huh? Life is a lot more fun that way.