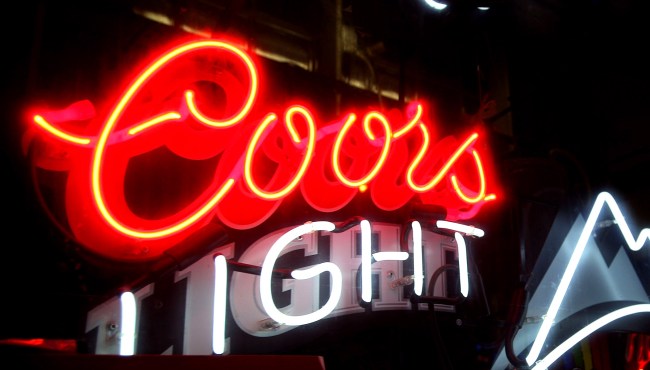 World War II veteran Andrew E. Slavonic, who turned 102-years-old on December 1, knows what it takes to live a long, fruitful life: drinking a Coors Light every day at 4 p.m. At least that’s what he credits for his incredible longevity.

Slavonic, who first made news in 2018 for claiming his fountain of youth springs from a Coors Light can, was the recipient of a Coors Light-branded refrigerator stocked with his favorite beer along with some dope swag when MillerCoors heard his story.

The company also had him out to the Coors Brewery in Golden, Colorado for his daily 4 p.m. beer and Slavonic was also honored by his Pittsburgh Penguins at a game, where, you guessed it, he had himself a Coors Light.

It was an honor welcoming Army Air Force veteran Andrew E. Slavonic and his family to the Coors Brewery in Golden last week. https://t.co/SMyAHHPBk3

His secret to a long life? Coors Light.

Fast forward one year and the Army Air Force veteran is still kicking, and still singing the praises of his life-giving 4 p.m. Coors Light.

“All I can say is that it has been one helluva of a year for dad. He has never had this much attention in his life. I really think he loves it,” Slavonic’s son Bob told Fox News. “He has met various people around town that have come up to him and wanted to shake his hand and ask him if it really the one Coors Light that keeps him going. He says it is. We go to the local VFW Post 764 every Friday for dinner and everyone there just loves seeing him and talking to him.”

Bob explained that his dad started drinking regular Coors beer in 1996, but eventually switched to Coors Light because he prefers the taste. Plus, his doctor recommended it.

Drinking beer will apparently keep you young — at least it has done so for WWII veteran Andrew E. Slavonic, who is celebrating his 102nd birthday on Dec. 1. (via Fox News) https://t.co/7WFCzxd9XM

The vet says that sometimes he has more than one Coors Light, but it’s that 4 p.m. beer that counts the most.

“I was mowing my lawn at about four o’clock. When I was finished with the lawn, I’d have my Coors Light. That’s when it hit the spot,” the veteran told CBS-Denver in 2018.

“I can sit here and drink this all day, it’s like a medicine,” he added.

Makes sense, as his son Bob said, “Maybe I need to have a talk with Jimmy and have him do another version of the song for 4:00 p.m.”

After all, it is 4 o’clock somewhere too.