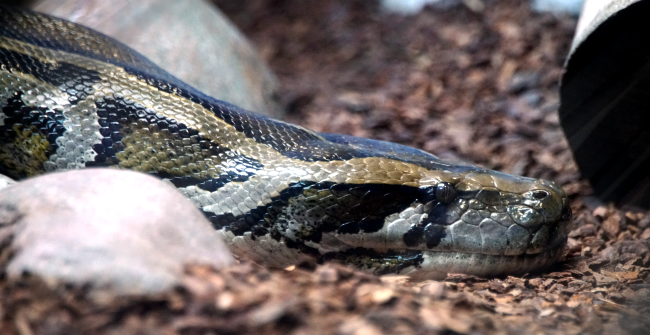 Usually when we see gigantic pythons they’re doing terrifying things in the state of Florida, but today we travel to the Phitsanulok province in northern Thailand to watch a wild Burmese python that got a little too greedy when it tried to swallow an entire cow whole.

Yep, Burmese pythons can do such a thing. They have the ability to swallow cows, alligators, goats, deer, and even human beings (that’s right, it’s happened – do NOT watch the video below) all in one single bite.

This particular Burmese python paid the ultimate price for its gluttony, however.

According to Newsflare, the 15 foot long snake was discovered on August 21 after a farmer went searching for the missing cow.

What he discovered, and filmed, natch, was that his missing cow had been swallowed whole by the gigantic snake.

“The python must have been hungry and saw the cow. It then strangled the cow to kill it before swallowing its whole body,” said village official Nirun Leewattanakul.

“However, after the cow died inside the snake, its body became swollen and stretched the snake’s stomach even more. It was such an scary scene.”

Newsweek reports that back in 2018 a 32-pound Burmese python swallowed a 35-pound white-tailed deer. It was, at the time, according to LiveScience, “the biggest prey-to-predator weight ratio ever documented for Burmese pythons.”

Authorities reportedly burned and buried the remains of the cow and snake because that’s what you do when you encounter such a terrifying scene.

Watch the horrifying video of the Burmese python that swallowed a cow whole HERE.