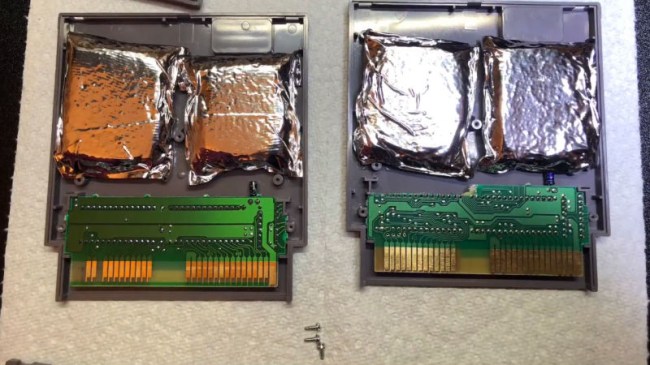 One retro video game collector got way more than he paid for. Old school video game enthusiast Julian Turner hit up a flea market in Georgia earlier this month and purchased some NES games and when he got home he found a surprise. The Nintendo video game cartridges had illegal drugs hidden inside. Usually, when you get a free gift with purchase it’s a crappy tote bag or keychain, but this dude gets drugs. Some guys have all the luck.

Turner bought the NES games of Rollergames and Golf, but when he got home he noticed that the copy of Rollergames was a Phase Alternating Line (PAL) version that is intended for Asia, Africa, Europe, South America, Oceania. Turner also realized that both games were way heavier than they should be. He unscrewed the backs of the cartridges to examine them further. Inside he found four shiny plastic bags that contained drugs inside. This certainly changes the meaning of “blow in the cartridge.”

Turner notified the Newnan Police Department about the illegal drugs. Surprisingly, the drugs were planted in Rollergames and Golf and not this game.

Julian did some digging and found a story about a copy of Golf that was filled with $5,000 in bills. *Immediately opens up every single one of his NES games*

I have a feeling that there will be a huge spike in the number of people heading to flea markets this weekend to purchase old school video game cartridges.