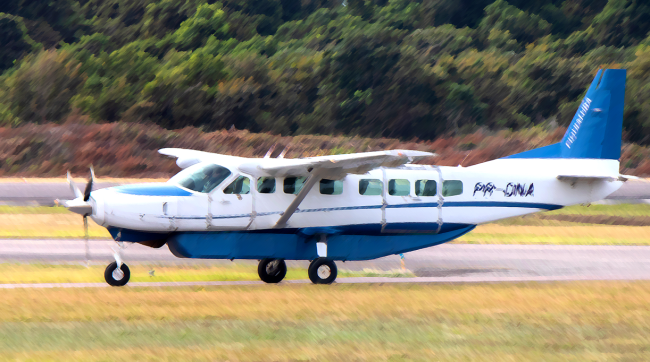 At least that’s what one passenger did this week with some guidance from a heady air traffic controller.

Wild video with audio of the passenger speaking to air traffic control was obtained by WPBF 25 News.

“I’ve got a serious situation here,” the passenger informs air traffic control over the radio. “My pilot has gone incoherent. I have no idea how to fly the airplane.”

“I have no idea,” the passenger responded. “I can see the coast of Florida in front of me. And I have no idea.”

“Maintain wings level and just try to follow the coast, either north or southbound. We’re trying to locate you.”

A few minutes later the passenger, now at the plane’s controls, asks, “Have you guys located me yet? I can’t even get my nav screen to turn on. It has all the information on it. You guys have any ideas on that?”

Once the plane was located the air traffic controller, Robert Morgan, was somehow able to talk the passenger down, landing safely on the runway despite not being familiar with the aircraft. He used a picture of the cockpit to understand what the passenger was looking at and guided him through the controls. It also helped that Morgan himself is also a flight instructor.

“I knew the plane was flying like any other plane, I just knew I had to keep him calm, point him to the runway and tell him how to reduce the power so he could descend to land,” Morgan said.

Jet Blue pilot Justin Dalmolin, who said he was in the air waiting to land while controllers worked with the passenger to land the plane, couldn’t believe what was happening.

“The level of difficulty that this person had to deal with in terms of having zero flight time to fly and land a single-engine turbine aircraft is absolutely incredible,” said Dalmolin.

“The incredible part is not just flying the aircraft but obviously the most difficult thing which is configuring the aircraft for approach and landing,” Dalmolin continued. “And then landing it, and that to me, for a zero time pilot.