The ‘Josh Fight’ Meme Actually Happened IRL, Horde Of Joshes Met In A Cornfield To Beat Each Other Up With Pool Noodles 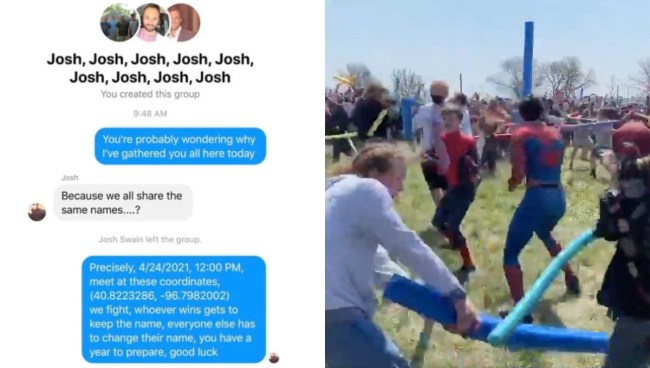 Sometimes, the internet — arguably the worst thing to happen to humanity during my lifetime — can produce a moment of pure zen. Dozens upon dozens of dudes named Josh meeting in a random Nebraskan cornfield to wail on each other with pool noodles on a nondescript Saturday in April is one of them.

In case you aren’t fully steeped in Internet Culture, the Josh Fight Meme first cropped up last year when a Facebook user named Josh Swain (a college student in Arizona) created a gigantic Facebook message with hundreds of other Joshes and challenged them to battle to determine the ultimate Josh.

“You’re probably wondering why I’ve gathered you all here today,” the 22-year-old wrote to the group.

“Because we all share the same names…?” replied another Josh.

“Precisely. We fight, whoever wins gets to keep the name, everyone else has to change their name, you have a year to prepare. Good luck,” Swain said.

Lo and behold, because our reality is nothing more than a malfunctioning simulation, the Josh Fight *actually* happened on the scheduled date (4/24/21), as a horde of Joshes met in a field outside of Lincoln, Nebraska on Saturday to duke it out for Josh Supremacy with nothing more than pool noodles and the will to win. And because something like this could only happen in the year of our lord 2021, the whole event was obviously chronicled on TikTok.

battle of the Josh’s #josh #joshfight

I saved some footage from the fight!

Perhaps most surprising is that an actual winner of the Josh Battle — which also raised food and money for charity, so it wasn’t a *total* absurd waste of time and space — was declared, as four-year-old Lil Josh was hailed as the victor when the Josh Dust finally settled. HAIL LIL JOSH!