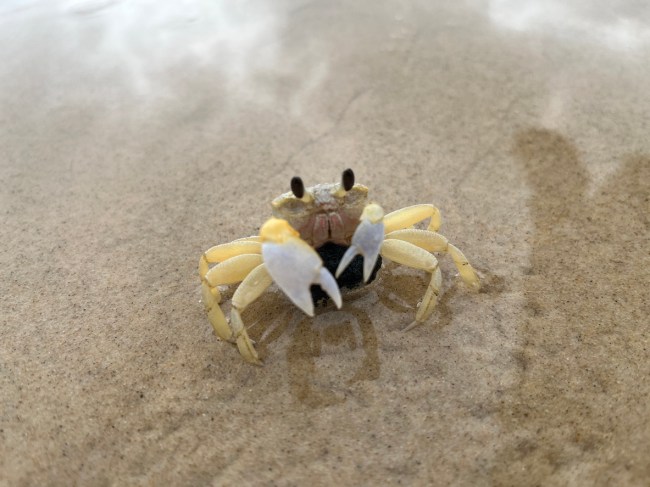 An eye-opening video clip shows the mind-numbing moment when a crab got stuck in the ear of a woman while she was snorkeling.

A young woman had a tiny crab enter her ear while she was snorkeling while snorkeling in San Juan, Puerto Rico. The one-minute video shows someone attempting to extract the small crustacean from the snorkeler’s ear with tweezers. The person with the tweezers warns: “This is gonna hurt.”

The creepy crab evades the tweezers for a maddening amount of time. Then the creature sprints out of the ear and is slapped to the ground. The woman exclaims, “What is that?!”

RELATED: 50 Million Creepy Crabs Have Completely Overtaken An Island During A Massive Migration

The viral TikTok video was uploaded by user @wesdaisy. The video has garnered over 2.4 million views in five days has a caption of: “Snorkeling in San Juan a f****** crab yo.”

RELATED: There’s An Army Of Red Crabs Swarming The Ocean Floor And It Looks Like A Terrifying Alien Invasion

Surprising enough, this is not the first time someone recorded a woman who had a crab stuck in snorkeler’s ear. In fact, a woman got a crab lodged inside her ear canal in Puerto Rico in October 2021.

As BroBible previously reported, the woman was instructed to close her mouth and nose. Then, the person advises trying to push the air into her ears to push out the crab with pressure.

RELATED: Moment Unsuspecting Crab Gets Merked By Octopus Flying Out Of Water