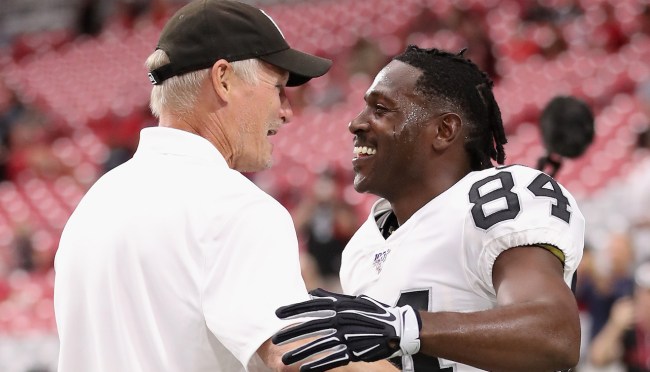 Ever since the Oakland Raiders traded for the Kanye West of the National Football League, their relationship has been nothing short of a perpetual clown show, as his tenure in California has been marred by frostbitten feet, overblown (and possibly purposefully engineered) helmet drama, and training camp no-shows.

And now, just when it seemed like Jon Gruden and the wood-knocking Raiders had finally made it out of the woods because AB finally decided on a helmet a mere week before their season began, the relationship between the team and the player has seemingly been turned up to 11.

According to Adam Schefter and Ian Rapoport, just one day after AB posted the fine letter that Raiders’ GM Mike Mayock sent him on Instagram, the two reportedly blew up in an “ugly” exchange that almost became physical, as Brown told Mayock that he would “hit him in the face”.

#Raiders WR Antonio Brown and GM Mike Mayock got into it earlier this week, and it got ugly. Mayock clearly frustrated with AB posting his fine letter on Instagram. And now, a suspension for conduct detrimental could mean losing $30M in guaranteed money.

And in case you needed further proof that AB is way off the reservation, Vic Tafur of The Athletic reported that Vontaze Burfict, of all people, was one of the players holding Brown back from Mayock.

Folks, when Vontaze Burfict — one of the NFL’s premier outlaws — is playing reasonable peacemaker in a situation, you know shit has officially hit the fan.

One of the players holding Antonio Brown back from the near-altercation with GM Mike Mayock was … Vontaze Burfict.

Following the altercation, the Raiders are reportedly considering suspending AB for conduct detrimental to the team, which would potentially void his $30 million of guaranteed money. And if that happens, we wholeheartedly expect Brown to go full “some men just want to watch the world burn” mode.

Let this be a life lesson to all of you out there, one that the Raiders and Mike Mayock should have considered long before trading for the league’s most mercurial player: you reap what you sow.