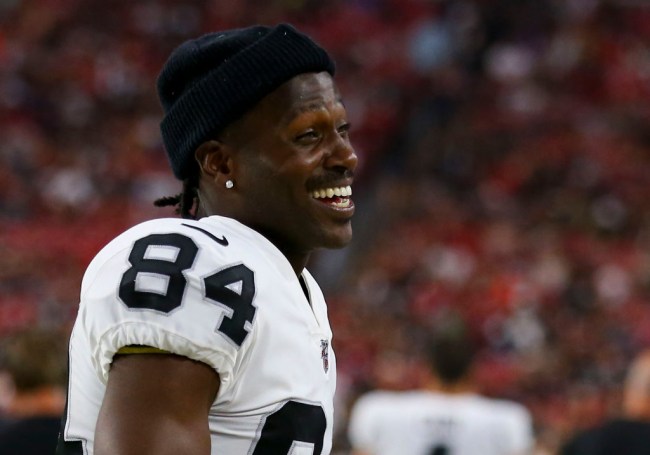 Antonio Brown found himself embroiled in some serious drama in what would end up being his final season with the Steelers after getting into it with Ben Roethlisberger before being sent to the Raiders, where he looked to get off to a fresh start under the guidance of Jon Gruden.

However, it didn’t take long for the wide receiver to make some waves in Oakland after he decided to throw an absolute fit when the NFL informed him he’d no longer be permitted to wear the helmet he donned during his time in Pittsburgh.

Brown initially suggested he’d retire if he wasn’t allowed to take the field wearing his headgear of choice—a threat that didn’t exactly go over well in the locker room—and even went as far as threatening to sue the NFL if he suffered a concussion if he was forced to wear a different helmet (which was slightly ironic when you consider there’s some speculation prior concussions can explain the fit he threw).

After filing multiple grievances against the league, it appeared Brown had finally accepted his fate when it was revealed he was pursuing an endorsement deal a couple of weeks ago, and on Wednesday, it appeared the saga had finally come to a close when we learned he’d decided to link up with a new company that will be providing him with a new lid.

In the announcement, Brown says the decision was his “most calculated move by far,” which has led to some speculation that the entire thing was actually an elaborate stunt by the wide receiver to find a way to profit from the situation.

I personally doubt that Brown was actually playing 4D chess this entire time, as I find it hard to believe he’d purposefully piss off his teammates, coaches, and fans in pursuit of a paycheck.

With that said, I can’t help but respect the hustle if the speculation turns out to be true.