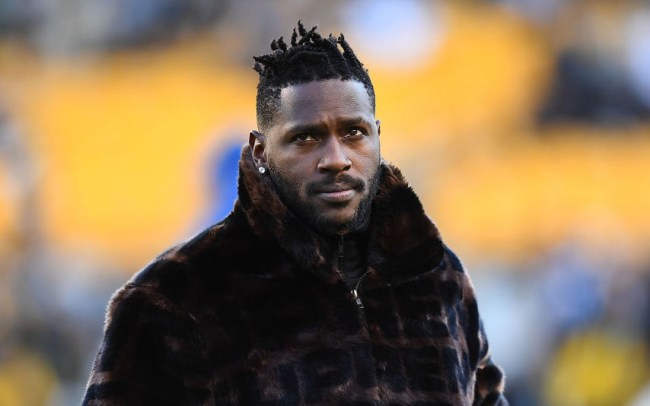 As Dak Prescott recently proved, there is no shortage of divas in the NFL and the Steelers learned this lesson the hard way last season when they were forced to deal with the egos of both Le’Veon Bell and Antonio Brown.

After off of the roller coaster ride that was the former’s holdout, the team found itself once again dealing with some drama courtesy of the latter, who demanded a trade and would eventually get what he wanted when he was dealt to the Raiders after spending the offseason firing shots at Pittsburgh.

It appeared all was well and good in Oakland (at least aside from the whole “frostbite” thing) but things took one hell of a twist last week when Brown decided to flip out when he was informed he’d no longer be allowed to wear the helmet he played with during his time with the Steelers.

Brown has gone as far to threaten to retire if he doesn’t get his way, and based on the NFL’s response, we may never see him on the field again if he’s truly a man of his word.

It’s kind of hard to believe someone would pick this hill to die on and I’m not the only person who’s a bit befuddled by the most recent development in Brown’s neverending saga. However, if one theory is to be believed, there’s a simple explanation: Brown has a serious case of CTE.

In 2016, the infamously dirty Vontaze Burfict absolutely leveled Brown with a hit to the head and the wide receiver suffered a serious concussion as a result.

Over the weekend, I came across a thread on Twitter that took a deep dive into Brown’s history of acting up, and after making my way through it, I’m very on board with the theory that CTE is to blame.

I've been paying close attention to Antonio Brown's case since he started having problems with the Steelers. I really wanted to know what was going on.
I myself wanted to believe AB's side, since Big Ben has a bad rep and AB had never been much of a trouble maker before. pic.twitter.com/t6Jadg7Mqc

So when AB is in the middle of getting traded, he thanks the Steelers' fans and he seems to be thankful with everybody, maybe Ben was the only one that he really had bad blood with. Everything seems to line up.https://t.co/LolSqMEYMF

Juju even got caught off guard, they had been cool all this time, why all the hate out of nowhere? AB started throwing shade at Juju but over what? Some trolling kid's tweets?https://t.co/SLgYEdLgRI

Sure he has his little things here and there, like arriving in a hot air balloon to training camp, not listening to Gruden when he tells him to not train too hard. He even got a more important situation with the frostbite on his feet, but he hasn't had any personal conflicts. pic.twitter.com/JYLpGGCvY0

Now here's when you gotta stop and really look at the bigger picture, these are some new levels of NFL Diva lmfaoo like it's way too much, he always has something new to complain and make it a big deal, even if it's just changing helmets.

Okay so he started to act out after the 2016 season. What exactly happened that season you ask? Well just his infamous concussion involving Burfict in the 2016 Wild Card Game. pic.twitter.com/caFjccKc78

Here's an interview about his concussion a few months after it happened. You can tell it really fucked him up, drags some words, talks slower and he even mentions a lot of the first stage synthoms of CTE. He didn't finish the game after that big hit. pic.twitter.com/ALGYScrrML

First he gets mad about the game
Then he starts beef with Ben who's not such a nice guy
Then he starts shading Juju who IS a nice guy and always looked up to him
Nowadays he's acting out because of some helmet? If you notice, his excuses for acting out are becoming less valid. pic.twitter.com/9QUDxEIuli