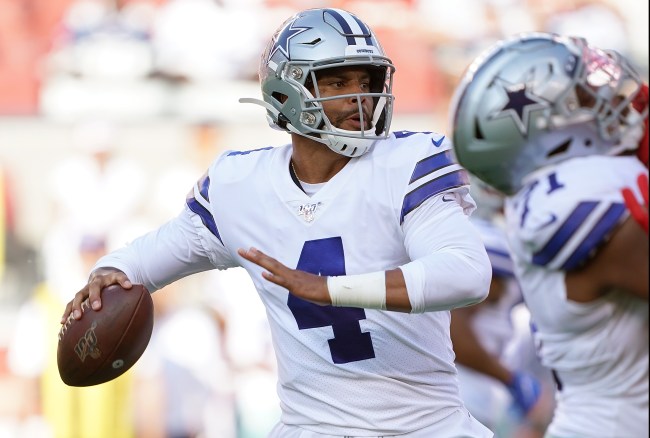 It seems like Dak Prescott is deadset on becoming one of the highest paid players in the NFL.

Dak’s team, the Dallas Cowboys, are currently deadlocked in contract negotiations with three of their top offensive stars. Earlier this week ESPN reported that the Cowboys had made “generous” offers to Prescott, running back Ezekiel Elliott and wide receiver Amari Cooper to keep the core offensive unit with the team for the longterm.

Jones said last week that he thought the front office would reach a deal on a contract extension with Elliott but that it would need to allow the Cowboys to keep all their talent “under the same roof.” The Cowboys also are negotiating extensions with quarterback Dak Prescott and wide receiver Amari Cooper.

The owner also said he does not believe there is a time when a deal has to be put in place, such as the start of the regular season.

The Cowboys insist they have made solid offers to all three players that would put them at least in the top-five contracts at their positions and have been frustrated at the lack of engagement in negotiations, a source told ESPN’s Todd Archer.

NFL Network’s Jenny Slater also confirmed ESPN’s report by adding that the Cowboys are ready to have the players play the season on “prove it deals”.

Back in Oxnard for #Cowboys camp today and Wednesday and a few new details on the contracts front. I’m told the team has “generous” offers on the table for their QB, RB and WR. Putting each one in the top 5 “highest paid” at their positions.

Additionally, I’m told they’re ready and willing to get the deals done but if the two sides can’t agree on numbers that make more sense the #Cowboys are prepared to play this season with each player on a “prove it deal.” https://t.co/Grwlg3zTV4

Today, Michael Lombardi of the Athletic revealed that he’s hearing that Prescott had turned a contract that would pay him $30 million a year.

If Dak Prescott has turned down an offer in the 30 million per year range, which is what I am hearing, then he is nuts. Not a top-five quarterback

Of course we don’t know the structure of the deal and how much of it is guaranteed but that’s still a lot of money to turn down.

Dak Prescott wants more than $30 million a year. Ok, Cowboys have offered Prescott, Amari Cooper and Ezekiel Elliott contracts that would put them each in top 5 of average salary at their positions. This is business.