Walt Jr. Reveals He Is Not Being Included In The Upcoming ‘Breaking Bad’ Movie, Sounds Torn Up About It 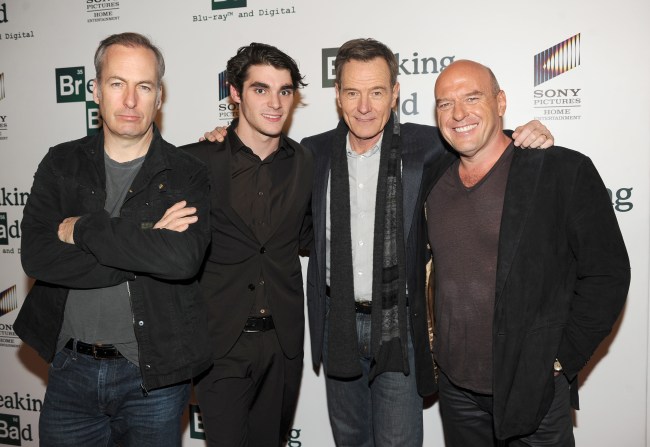 Unfortunately, those involved with the film, which Netflix will have the first-run rights to, are keeping tight-lipped.

What Bryan Cranston did tell us is that the movie will likely be centered around Aaron Paul’s character Jesse Pinkman. The movie is still in its early stages of production so we’re looking at 1-2 years before new Breaking Bad content graces our screens. Until then, we must rely on breadcrumbs from people RJ Mitte (aka Walt Jr. aka Flynn) who recently told The Wrap that he’s “not a part” of the movie that the Albuquerque Journal reported may be code-named “Greenbriar.”

This revelation seems to disappoint Mitte, as he has constructed a fantasy for his character to investigate all the shit that went down in a professional capacity.

“Walt escapes capture, Jesse came back to Walt after the whole shootout, Walt and Jesse disappear for five years, and Walt Jr. is still living with his sister, almost in like DEA housing,” Mitte told TheWrap, while also sharing his involvement as a judge in the Easterseals Disability Film Challenge. “Then Walt Jr. pretty much joins the DEA and is hunting after his father. He kind of takes Hank’s role where Hank left off. My idea is that he’s trying to go out, find what happened to Hank and go after Jesse and Walt.”

Mitte, who has cerebral palsy, revealed that he’s a little bummed that he was not included in the evolution of the story that made him internationally known.

“Of course I would be interested in being a part of it. I miss being part of a job that actually pays well,” Mitte said. “It’s been an iconic part of my life. I started that show when I was 13 years old and I finished it when I was 20 years old, and that was my whole career, that was my whole existence for those 7 years, and I miss that family. I miss those people. It would be great to be a part of that.”

(As far as the ‘pays well’ part, Cranston took home $225,000 per episode, while co-star Aaron Paul earned $150,000 per. It wasn’t confirmed what Mitte made per episode, but you’d have to imagine it wasn’t pennies.)

Bryan Cranston may not have a part in the new feature film either, seeing as his character is dead, but hopes that Vince Gilligan can work his magic to include him.

“I don’t know if there’s an appearance — flashbacks, flash forwards — but I’m excited about it because it’s Breaking Bad and it was the greatest professional period of my life and I can’t wait to see all those people again, even if I just come by to visit,” he said on The Dan Patrick Show.