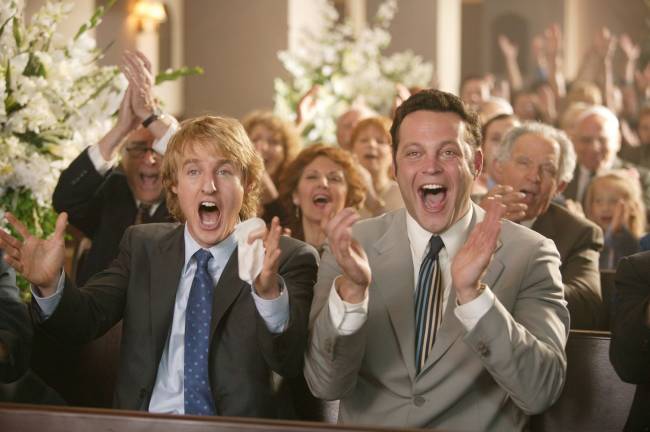 Of all the iconic comedies released during the early 2000s — you know the ones, Anchorman, Old School, 40-Year-Old Virgin, etic — 2005’s Wedding Crashers may arguably be the most quotable. My old roommate from college and I probably only see each other a few times a year these days, and even still, we almost always call each other some form of a “Motorboatin’ son of a bitch”. I’ve lost track of times that I’ve looked at him square in the face before putting an expression of gleeful exasperation on my face as I blurt out “WHERE IS SHE?! SHE STILL IN THE HOUSE?!”

Lest we forget other iconic lines such as “I’m sorry I called you a hillbilly. I don’t even know what that meant”, “Tattoo on the lower back? Might as well be a bull’s eye,” or the *entire* Will Ferrell. Is Wedding Crashers the *funniest* of those beloved early-to-mid 2000s comedies? That’s not for me to decide. But is it one of, if not *the* most quotable? It certainly makes a compelling case.

So, as you can tell, I’m quite obviously very excited about this news that not only is a sequel actually happening, and not only is the entire main cast — Owen Wilson, Vince Vaughn, Rachel McAdams, and Isla Fisher — all set to return, but production is beginning in just two months, according to Production Weekly.

Now, as for what a Wedding Crashers sequel will look like, the plot remains a secret, although Vince Vaughn did tease his idea for the film last fall:

“[Director] David Dobkin had a really good idea that’s contemporary. I never went and made a sequel to a lot of these films at the time because it felt like we were just chasing a success. But what I like about where Crashers could potentially be at is [that] there’s something that is of this moment that feels really good… a lot of these comedies, even something like Wedding Crashers, you’re sort of investigating things that I think are real in our lives, but the comedy is an overcommitment to the absurd.” [via Cinemablend]

At this time, the Wedding Crashers sequel has neither a title nor an official release date. Given that production is set to begin in August, the film is likely on track for a late Summer 2022 release.

RELATED: ‘Wedding Crashers’ Director Reveals His Plans For What A Sequel Would Look Like