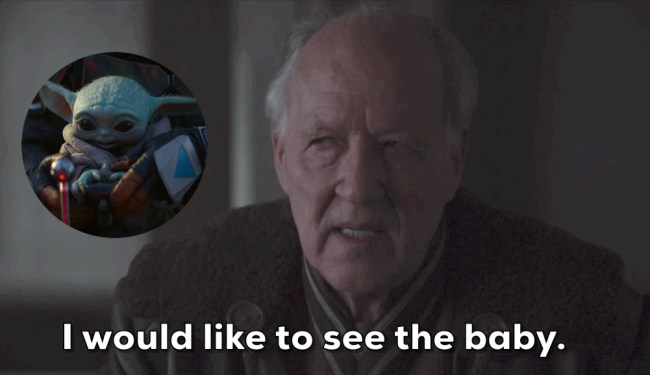 Do you know who Werner Herzog is? To be fair, while I was aware of his existence, I couldn’t pick the guy or one of his movies out of a line-up until after The Mandalorian, where he starred as a nefarious businessman known only as The Client. And while Herzog is chillingly fantastic in The Mandalorian, acting is far from his greatest talent, as he also just so happens to be one of the most influential directors of all-time.

The 78-year-old German, who’s considered one of the world’s greatest living filmmakers, has directed over sixty projects since making his first film back in 1961(!!!) at the age of 19. While he’s never gone fully mainstream, you may recognize a couple of his features, such as the Christian Bale-starring war film Rescue Dawn and the Nic Cage led Bad Lieutenant: Port of Call New Orleans.

If you want more history about the dude, just Google him, because all I’m really trying to do is provide the context behind this nearly 80-year-old film legend talking reverently about working with a furry green puppet.

Maybe I put a little too much keef in this morning’s bowl, but there’s just something about an artistic icon just losing his shit over Baby Yoda that I find equal parts hilarious and glorious. This man has dipped his talents into every pool of storytelling — directing feature films, television, and documentaries. He’s an actor and a screenwriter, a novelist, and an acclaimed theater director. When it comes to the intersection of art and entertainment, Werner Herzog has done it all. And still, despite all that, he just can’t fucking handle Baby Yoda’s adorableness. Just loses his shit. Has admitted to crying when he saw it. Called it “heartbreakingly beautiful.” A man who once opined that “the universe is monstrously indifferent to the presence of man” turns into a pile of mush when in the proximity of an animatronic Star Wars character. Literally giggling now as I type this. Just brilliant.

Anyway, Herzog’s latest quotes about Baby Yoda — which came during an interview with Variety — only further illustrate how much this giant of cinema beloved this little puppet.

“I tried to tell the humans who couldn’t see exactly what I saw,” Herzog explained. “And I said, ‘here’s the light. Our torchlight is going right in its eyes. It should close its eyes,’ and, of course, bang — they closed [Baby Yoda’s] eyes.”

This is far from the only anecdote surrounding Herzog’s relationship with Baby Yoda, with the frequently-stoic celebrity often treating the creature like a real human costar on set.

“Normally, you just approach them as actors, but Werner is special,” Deborah Chow, who directed episodes of The Mandalorian, revealed last November. “One of the weirdest moments I had on set, in my life, was trying to direct Werner with the baby. How did I end up with Werner Herzog and Baby Yoda? That was amazing. Werner had absolutely fallen in love with the puppet. He, at some point, had literally forgotten that it wasn’t a real being and was talking to the child as though it was a real, existing creature.” [via Comic Book]

Great news, everyone: it turns out we all have something in common with the great Werner Herzog.