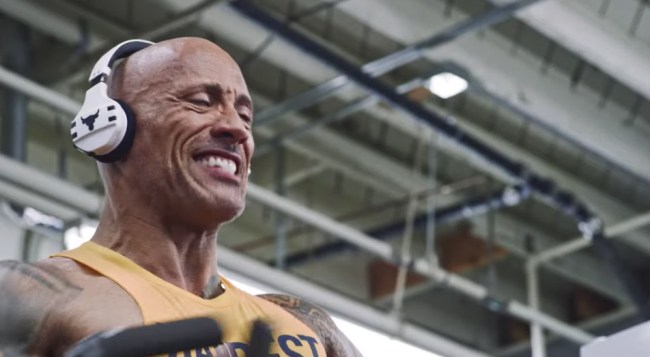 Dwayne “The Rock” Johnson (that’s his nickname, despite what Kevin Hart says) recently posted an Instagram photo of his “cheat day” meal.

“About🍦🍪 🎥 last night. Deciding what to rock on @netflix while my massive plate size chocolate cookie and chocolate fudge ice cream sammich patiently wait to get destroyed. What’s not pictured here is the second ice cream cookie sammich I retrieved from the freezer as well as a big ass slice of NY cheesecake. I wound up watching, Anthony Jeselnik’s #FireInTheMaternityWard stand up comedy special. Loved it. Brilliant. I took my #CheatMealSunday to a whole new level of gluttony, greed and darkness. And I feel very good about myself. #GoRock ✊🏾,” Johnson wrote in the caption to the photo.

Meanwhile, seven-time Academy Award nominee Glenn Close wrote, “Babe, if I worked as hard as you I’d be having a mountain of coffee ice cream with Oreo rocks, spewing out Doritos!! HAPPY MUNCHIN’ MEMORIAL DAY!!”

Who knew she and The Rock were so close? (Pun not intended.)

In addition to getting to see his mega-cheat meal in the photo we also got a peek at The Rock’s iPad, which was opened up to his Netflix homepage.

Considering the fact that Dwayne Johnson has appeared in and/or produced more movies and TV shows than any other human being over the past several years (26 movies and 9 TV shows since 2010 by my count), it’s interesting to see what kind of shows and movies, other than Anthony Jeselnik’s comedy special, are in The Rock’s Netflix “Continue Watching” queue.

Looks like DJ has been watching the docuseries The Circus, Ken Burns Presents: The West, Losers, Dope, Our Planet, Inside the Criminal Mind, and Beyonce’s film Homecoming.

It appears as though The Rock and I have a lot in common when it comes to our viewing habits. Basically, he and I are the same person is my takeaway.

As far as how often Johnson eats a gluttonous cheat meal such as this?