The First ‘What If…?’ Episode May Have Teased The Next ‘Doctor Strange’ Villain

While the premiere of What If…?, the first-ever animated project in the Marvel Cinematic Universe, was set in an alternate timeline in 1940s Europe, fans believe the episode has implications for one of the bigger upcoming MCU films, Doctor Strange in the Multiverse of Madness.

Warning: spoilers for the premiere episode of Marvel’s What If…? will follow.

In this timeline, instead of using the Tesseract to build weapons, Red Skull uses it to open a portal to another dimension, unleashing a gigantic squid-like creature in the process. That creature, fans believe, is the interdimensional demon known as Shuma-Gorath. 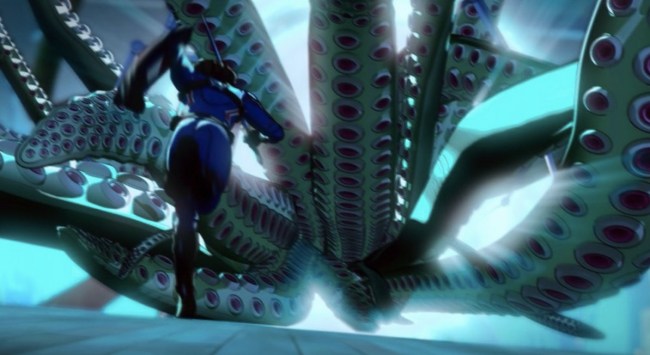 The character can get quite comic book-y, so I'll let the true professionals, Marvel themselves, explain the character:

Shuma-Gorath is the archetypal Class Three demon, native to an extradimensional realm. He is one of the “Old Ones” who came to Earth untold millions of years ago, ruling it and feasting on mankind’s ancestors.

In the modern era, Shuma attempted to be reborn on Earth through the mind of the Ancient One via his agents Nightmare, Sligguth, Ebora, N’Gabthoth, Dagoth, Kathulos, and Living Buddha. Unable to stop the demon, Doctor Strange instead slew the Ancient One, banishing Shuma back to his realm while allowing the Ancient One to become one with the universe.

Prior to the premiere of What If…?, there had been rumors that Shuma-Gorath would be the antagonist in Doctor Strange in the Multiverse of Madness, and given the way in which What If…? ended its first episode — Peggy Carter not only surviving her battle with the beast but winding up in the present day — there’s reason to believe the Shuma-Gorath’s fate is somewhat similar.

When I spoke with What If…? director Bryan Andrews and head writer A.C. Bradley, I asked if the MCU is heading towards a Roger Rabbit situation, wherein someone like Doctor Strange actually crosses paths with Captain Carter in her animated form. While Andrews didn’t go as far as that, he also said when it comes to the MCU, “never say never”, so it’ll be interesting to see how Captain Carter is utilized in the wider MCU going forward.

The second episode of What If…? will hit Disney+ on August 18.