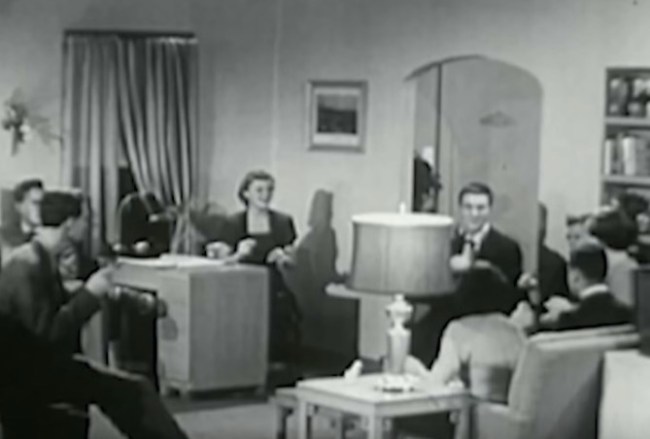 You know how we rip on our parent’s generation for always referencing ‘the good ol’ days’ when they can’t even pinpoint WTF was even great about that era? You ask them and all they can tell you is life was better when everyone could leave the door unlocked. Now, thanks to this 1950s footage of teenage house parties uploaded to YouTube by the History Channel we have proof that life actually sucked gigantic donkey farts back then.

Parties were considerably different back in the 1950s. In order to throw a successful hootenanny in the 1950s, you needed a buffet course, clapping games, and you could even incorporate some hat-making if you really wanted to pull off a barn burner:

The legal drinking age was 18 back then and just like in Europe, American teens started before that 18-year-old threshold. But let’s just assume these young partiers are 18-years-old and can drink legally, and then let’s assume the 21-year-old modern equivalent. Can you imagine being 21-years-old and showing up to a party and 1) there was no beer pong and 2) there was a fucking buffet set up?

Sure, the buffet food would be awesome but I’ll always prefer a nuggets platter from Chick-fil-A but….Hat-making!?! What were our parents thinking back then? Hat-making was really the best activity they could come up with? No-fucking-wonder Mike Pence is such a weird dude. He spent his childhood making hats at parties.

(h/t All That Is Interesting)