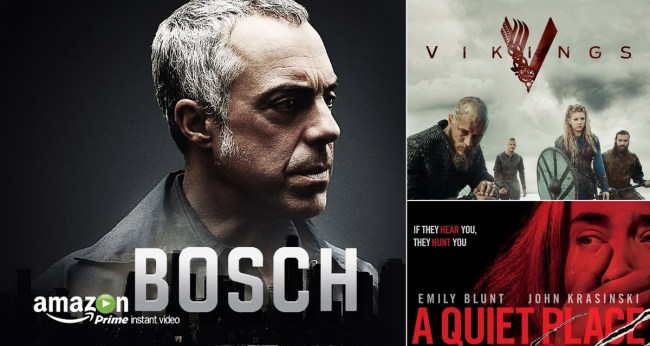 Anyhoo, speaking of the internet and streaming services, check out what’s new on Amazon Prime Video for the month of April 2019.

April brings four Prime Original series exclusively available for Prime members to stream or download at no additional cost to their membership.

• The Tick S2: In the second season of the Prime Original series, Tick and Arthur have freed the City from The Terror — now they must defend it from new villains and old enemies. That is if they can convince AEGIS, the government agency in charge of superhero regulation, that they deserve the job. But now that the City is ‘safe enough to protect’ Tick and Arthur begin to see they’ve got competition (Available in UHD and HDR on April 5).

• Diablo Guardian S2: The Prime Original series is based on Xavier Velasco’s award-winning novel, and tells the story of Violetta, a young woman who flees her native Mexico to start anew in New York City. But instead of living a dream, Violetta is awoken to a harsh reality when she runs out of money, sending her into the arms of the villainous Nefastófeles (April 12).

• Bug Diaries S1: The Prime Original series follows three unlikely bug buddies, Fly, Spider and Worm, fly, spin, and jump into all kinds of adventures in the big world around them. Imagine hopping a ride on a furry dog or dodging raindrops bigger than your house! Using their unique insect abilities, our tiny heroes find ways to help themselves and others out of sticky situations and record their stories in their bug diaries (April 12).

• Bosch S5: The Prime Original series stars Titus Welliver and returns for a fifth season fifteen months after Bosch brings his mother’s killer to justice. New evidence in an old case leaves everyone wondering whether Bosch planted evidence to convict the wrong guy. And a murder at a Hollywood pharmacy exposes a sophisticated opioid pill mill, sending Bosch down a dark and perilous path in pursuit of the killers (Available in UHD and HDR on April 19).

Available to rent or purchase on Prime Video include the mystery comedy Holmes & Watson (Will Ferrell and John C. Reilly).

Coming to Prime Video Channels in April, stream the highly anticipated return of HBO’s Game of Thrones on April 14. SHOWTIME will debut the sophomore season of The Chi on April 7. And The Twilight Zone, based on the original 1959 television series, will premiere on CBS All Access on April 1. Fans looking for basketball and/or golf can also stream the NCAA Final Four on April 6, the NCAA National Championship on April 8, and the Masters on April 13 via CBS All Access.