Netflix Adding Over 115 New Titles In April Including ‘Money Heist, Extraction’ And All 6 Seasons Of ‘Community’ 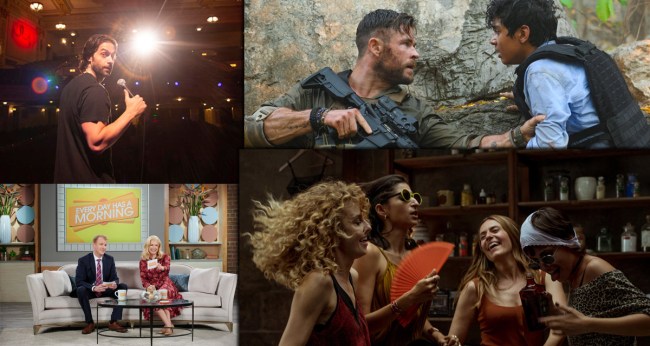 What did everyone do before the internet and all of these awesome streaming services we can watch? I mean, it looks very nice outside now as I watch all my favorite shows, documentaries, and movies. Did people actually leave ther houses and go outside back in the day?

I know it’s not 100 percent safe to go outside these days, despite what some people believe, so it’s a good thing Netflix just released their list of what’s new for the month of April (as well as what will be leaving the service).

Some highlights for the fourth month of 2020 include the fourth season of Money Heist (La Casa de Papel), the return of Ricky Gervais’ After Life, the debut of The Midnight Gospel, Extraction starring Chris Hemsworth, The Iliza Shlesinger Sketch Show, Chris D’Elia: No Pain, and all six seasons of Community.

It also means a whole new batch of must-see movies to watch such as Molly’s Game, The Social Network, The Matrix trilogy, The Hangover, Bloodsport, Salt, Minority Report, Taxi Driver and more.

Better hurry though on some other titles, because shows and movies like Space Jam, Goodfellas, The Craft, Big Fat Liar, National Treasure, Crash, Rounders, The Shawshank Redemption, and more are going to be going, going, gone in April.

April 2
The Good, the Bad and the Ugly
Violet Evergarden: Eternity and the Auto Memory Doll

April 3
Coffee & Kareem (Netflix Film)
Money Heist (La casa de papel) Part 4 (Netflix Original)
• • Lives are on the line as the Professor’s plan begins to unravel and the thieves must fend off enemies from both inside and outside the Bank of Spain.

April 5
The Killing of a Sacred Deer

April 6
The Big Show Show (Netflix Family)
• • Former WWE wrestler The Big Show is out of the ring and ready for an even tougher challenge: raising three daughters with his wife in Florida.

April 20
Cooked with Cannabis (Netflix Original)
• • Chefs compete to get the hosts and special guests high on elevated cannabis cuisine with their artful use of leafy herb, THC infusions and CBD sauces.

The Midnight Gospel (Netflix Original)
• • Drawing on interviews from the “Duncan Trussell Family Hour” podcast, this animated series follows a spacecaster who travels the galaxy searching for the meaning of life.

April 24
After Life Season 2 (Netflix Original)
• • In series 2, whilst still struggling with immense grief for his wife, we see Tony try to become a better friend to those around him. Each grappling with their own problems and only to be intensified by the looming threat of the local newspaper being shut down.

Extraction (Netflix Film)
• • Tyler Rake (Chris Hemsworth) is a fearless black market mercenary with nothing left to lose when his skills are solicited to rescue the kidnapped son of an imprisoned international crime lord. But in the murky underworld of weapons dealers and drug traffickers, an already deadly mission approaches the impossible, forever altering the lives of Rake and the boy.

April 27
Battle: Los Angeles
Never Have I Ever (Netflix Original)