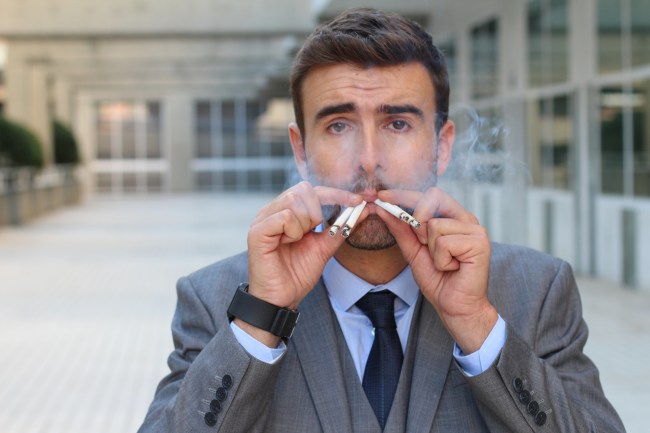 All of us have that one friend who epitomizes the definition of a pothead. Not only does that red-eyed, giggly bastard enjoy a wake-n-bake more than life itself, but he also cannot seem to function at all among civil society without a buzz between the eyes. Sure, he tells everyone that his consumption is purely medicinal, that it curbs the anxiety and stress he feels as a result of being a part of the human race or some shit. But it is painfully evident that the poor schlub would basically wither up and die without weed. And hey, who are we to judge? Everyone has their vices.

Still, the one aspect that many of these depravities have in common is they can sometimes disrupt our lives and make it difficult for us to be the productive members of the community that we’ve always been told we should. So when that stoner buddy of yours shows up at the doorstep talking about, “Hey man, I got tossed out of my apartment for not paying rent or something, can I sleep on your couch for a few days?” that’s when it’s probably safe to assume that weed has got him by the balls.

Of course, there is a distinct possibility that you are this friend in your group, and perhaps, just maybe you are reading this article down at the homeless shelter trying to figure out your next move. Well, they say that admitting you have a problem is the first step to recovery. Maybe it’s time to fire one up and give some consideration to the following.

It is essential to understand that marijuana is not addictive in the same way as other substances like heroin and methamphetamine. Studies have shown that it is safer and less habit-forming than almost any other drug in the world. In fact, in all of our years covering the drug culture, we’ve never heard any stomach-churning horror stories about how some desperate pothead was forced to trade sexual favors for a dime bag. And if we did, we have surely blocked them out by now.

Nevertheless, the federal government claims that roughly 9 percent of the pot-smoking population is destined to suffer from some dependency issues. Considering there are now 40 million regular cannabis users across the United States, this means that millions of stoners nationwide could experience some personal difficulties due to their affinity for weed. Is this you? Well, here are a few telltale signs that it could be. If so, you have our deepest condolences.

Can’t Stay Out of Trouble With The Law

If there is one gnarly trait indicative of a person with a substance abuse problem – regardless of whether it is weed, alcohol, or crack — it’s that the bastard cannot stay out of trouble with the law. It doesn’t matter where he goes or what he does, rest assured there is a pissed off policeman in his future, ready to drag his ass to jail for upsetting the pecking order of the social norm.

We’ve even seen this sort of insanity happening in states where weed is legal. Because while it is rare for anyone to get busted for pot possession in those areas (although there are still limits to how much marijuana a person can have), it’s not unheard of for pot consumers to get nailed by the po-po for stoned driving and other offenses. So if you have found yourself standing in court a little more lately because of weed-related snags; if the judge knows you on a first-name basis, that could be a sign that the grim reefer is at the wheel, baby. It could be time to reconsider everything. After all, most pot consumers go their entire lives without ever going to jail for weed.

Can’t Seem to Stop Screwing The Pooch At School

It only stands to reason that with marijuana becoming increasingly more popular across the great U.S. of A, it’s making its way to more college campuses. And in many cases, it’s taking the place of alcohol for a new breed of students averse to the ways of the American drunkard. Some studies show that binge drinking is down in states where marijuana is legal, which means that some of your livers might survive long enough to get a degree. But if you’re getting all chiefed out on weed and perhaps waking up most mornings burned out and tired as all-be-damned, you could be heading into dangerous territory. It could start as harmless as showing up late for class a time or two, and the next thing you know, you’re back in the parental basement, playing video games all day, getting fat on Cheetos and eating Hamburger Helper with your folks at 5pm. If this comes anywhere close to resembling your situation, maybe pot isn’t for you.

Can’t Seem To Hold A Job, Not Even A Shitty One

It goes without saying that the average boss doesn’t give two-flying squirts what an employee does on their own time, as long as it doesn’t interfere with work. And while most marijuana users have no problem whatsoever fulfilling their duty to the proverbial grind, some just can’t seem to avoid being royal fuck ups, no matter how hard they try. These are the fools that show up late all of the time, call off every other day, and sometimes even fail to show up for their shift for days on end. And when they return, they don’t have a fucking clue that they’ve done anything wrong.

“Ah, man, I didn’t know I was supposed to work.” Although some of their capriciousness is harmless enough – they’re just too high all of the time to get it together – that can still come with a price. So if your manager at the McNasty’s keeps riding your ass and threatening to shit-can you the next time you screw up, it might be time to put the weed down for a minute.