Macy Chanel, The ‘Sugar Baby’ Instagram Influencer In ‘Borat 2’ Is Actually An Actress 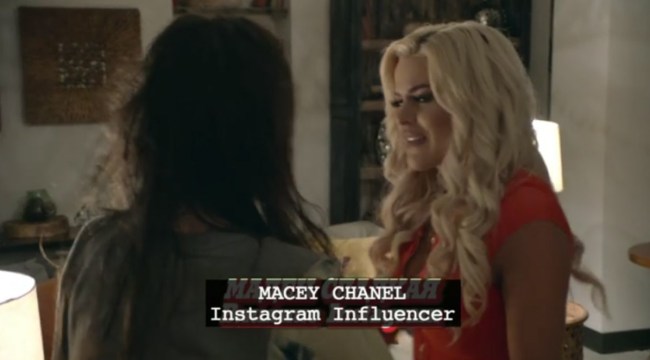 One of the many interesting things about Borat Subsequent Moviefilm: Delivery of Prodigious Bribe to American Regime for Make Benefit Once Glorious Nation of Kazakhstan, or Borat 2, is the fact that other than the titular character played by Sacha Baron Cohen, all of the other main players in the film are virtually unknowns.

For example, do you know who Maria Bakalova is? She’s the 24-year-old actress from Bulgaria who steals the show while playing Borat’s 15-year-old daughter Tutar Sagdiyev.

Another standout in the sequel, although with a much smaller part, is Macy Chanel (spelled Macey in the film), the “sugar baby” Instagram influencer that gave advice, explaining how to be a proper gold digger, to Borat’s daughter Tutar.

I have to admit, when I saw Chanel in the film I just assumed she was another real life person that Cohen had tricked into looking stupid by just being themselves.

Turns out, according to the 24-year-old Chanel, she was in on the whole thing and is just an actress.

“I came to Los Angeles a few years ago with stars in my eyes,” she told Page Six via email. “I have worked hard in a sometimes cruel and ugly industry to build my resume and will continue to work hard so Sacha [Baron] Cohen will not determine how my acting career is defined.”

Chanel said she was never told exactly what film she would be appearing in, and was “shocked” when a reporter called and told her she was in “Borat 2,” which is now streaming on Amazon.

She said she stumbled into the film when she received a “well-crafted email” about a role for “original programming” where she was supposed to help a foreigner learn the ropes of dating in the United States.

While filming, Chanel says she quickly understood it was “more of a comedy.”

“Maria is an excellent actress, but at no point did I believe her character was authentic,” she said of Bakalova, adding that she “improvised” and “played the part” she was cast to play.

Chanel, who hails from Texas, says she’s been financially independent since her mom was killed in an auto accident five years ago thanks to the life insurance she left behind.

She also told Business Insider that she may have gotten the role of a sugar baby due to her paid appearance in an advertisement for Seeking Arrangement.

All in all, she says she had a good experience on the film, even if it was difficult not to break character when Tutar used a very “unique” way to open a bottle of beer.