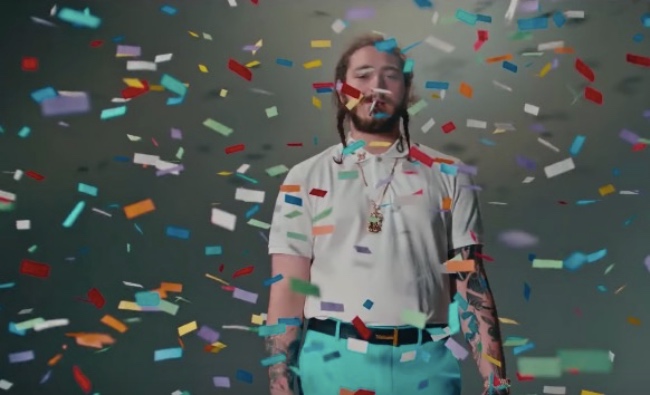 Post Malone‘s career has absolutely exploded in the past few years. He’s only 23-years-old and has only been ‘active’ as a professional rapper since 2015, but he’s been destroying the charts ever since he dropped the song ‘White Iverson’ which has since been certified quadruple platinum.

I could legitimately listen to Congratulations on repeat even though it’s been out for a few years. The repetition has never gotten old for me, and it’s precisely this repetition that works so well for Post Malone according to these songwriting experts. They explain what it is about his style of music (hint: I just said it above) that’s made him so insanely successful.

VICE spoke to Berkeley College of Music songwriting professors Kareem Clarke and Brian “Raydar” Ellis to discuss the Post Malone phenomenon. They credited his repetitive rhythms and melodies and strategic song structure as major players in his music’s popularity potential. Another advantage? His average singing voice.

“You know, it’s different from a Beyonce when she sings ‘Love On Top’ you know when she gets to the part where she modulates, in other words she goes from from one key to a higher key to a higher key,” Ellis explained. “When she’s doing that, at a certain point the average listener is just not going to be able to follow, like they can’t […] For artists like Post or artists like Rihanna, they tend to just work inside a specific, limited range of notes that complement their voice but also complement the average listener.” (via YouTube)

According to the video above, our brains love repetition. Post Malone almost always kicks off his songs with repetition (over 50% of his songs) and that hooks in the listener immediately by grabbing them with the catchy chorus. His music is also super easy for fans to sing along to because he doesn’t really stray from the main tempo of the song.

Basically, he makes catchy repetitive music that’s easy for fans to enjoy because it’s easy for us to participate in and digest. It’s worked really well for Post Malone, and there’s absolutely nothing wrong with that. Still, it’s interesting to see it work so well for him and artists like Taylor Swift but still remain a blueprint that only works for certain artists, and isn’t an industry-wide path to pop music success.