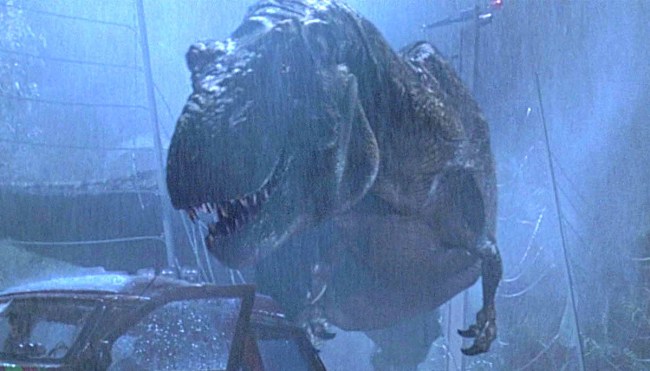 There are plenty of tips and tricks you could borrow from the Jurassic Park franchise when it comes to increasing the odds of survival if you ever ended up in a situation caused by scientists who were so preoccupied with whether they could bring dinosaurs back to life that they didn’t stop to think if they should.

However, I’m of the opinion that your best bet is to simply find the most painless way to end things as quickly as possible before you get the Dennis Nedry Treatment from a dilophosaurus, come across a pack of velociraptors, or attract the attention of a Tyrannosaurus rex.

There are few—if any—scenarios where those encounters are going to pan out very well for the homo sapien in the equation; contrary to what some internet memes may have led you to believe, you’re not going to make a T. Rex slink away in tears because you figured out how to make it feel self-conscious about his tiny arms.

Based on what we know about a species that translates to “King of the Tyrant Lizard,” those undersized appendages didn’t really put those dinosaurs at a huge disadvantage, which probably had something to do with the fact that they were still 20-feet tall beasts with a mouth filled with razor-sharp teeth and capable of reaching speeds of 30 MPH.

However, that hasn’t stopped plenty of people from attempting to come up with a theory to explain the small limbs over the years. That includes Kevin Padian, a professor at the University of California and curator at the school’s Museum of Paleontology who recently floated a new explanation in an article published in Acta Palaeontologia Polonica.

In the paper, Padian dismisses a number of previous ideas that asserted the arms had any real utility (while a T. Rex could theoretically bench-press 400 pounds, that number is fairly minuscule when it comes to the resistance they’d encounter during hunting or mating).

Instead, Padian posits that the stumpy arms were actually the result of evolutionary biology that emphasized self-preservation, suggesting that larger limbs could’ve been a “liability” in feeding frenzies where they would’ve been an ideal target for rival dinosaurs attempting to dissuade others from getting too greedy.

He does acknowledge the whole “extinction” thing means there’s no way to know for sure, but it’s certainly a fairly convincing argument.