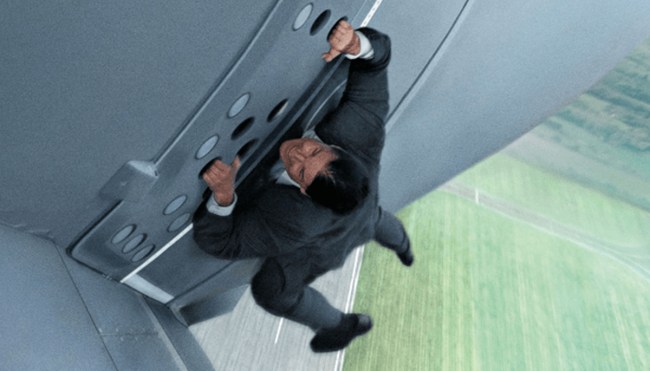 Tom Cruise has been one of the most reliably bankable movie stars Hollywood has had to offer since the 1980s. While he occasionally tried his hand at more dramatic roles in the early portion career, he’d eventually embrace his reputation as the action hero he’s portrayed in the bulk of the projects he’s tackled over the past couple of decades.

The actor has been subjected to plenty of criticism due to some of his, um, interesting personal beliefs, but you can’t deny the man is seriously dedicated to his craft and has been responsible for a ton of the kind of adrenaline-filled blockbusters so many moviegoers crave.

That includes the long-running Mission: Impossible franchise, which is comprised of some of the many films where Cruise has insisted on doing some particularly daring stunts all on his own. That approach has occasionally backfired (like the time he shattered his ankle after jumping off of a building), but it’s also produced some jaw-dropping scenes (like the time he strapped himself to the side of a plane during takeoff and jumped out of one 25,000 feet in the air).

When you consider he’s admitted he’s ruined at least a few takes by smiling while pulling off feats like those, it’s safe to assume Cruise genuinely enjoys putting himself in those kinds of precarious situations. Why? Well, that’s the question one person attempted to get to the bottom of during a recent event at the Cannes Film Festival.

On Wednesday, the actor received an honorary Palme d’Or and sat down for a discussion where a moderator asked him why he repeatedly “risks his life” on set, to which Cruise responded, “No one asked Gene Kelly, ‘Why do you dance?”

Cannes moderator asking about the dangerous stunts in MISSION: IMPOSSIBLE: “You risk your life, monsieur. Why do you do it?”

Tom Cruise: “No one asked Gene Kelly, ‘Why do you dance?’” pic.twitter.com/STuceTvJVj

The exchange was basically the Cannes equivalent of the interaction in Willy Wonka & the Chocolate Factory where a kid asked the candy shop owner how the chocolatier is able to dream up so many beloved creations.

The man who seemingly gives away free stuff to everyone but Charlie Bucket responded by inquiring if you ask a fish why it swims or a bird how its flies before capping off the reply with an explanation that is probably the closest we’ll ever get to the real reason Cruise does his own stunts: “They do it because they were born to do it.”