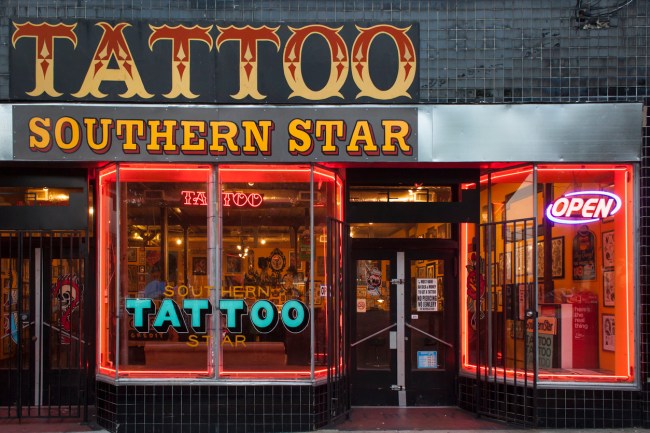 We take you to the U.K., where James McGraw got some new ink, and it was of his wife’s face. But instead of a sweet tattoo that celebrates their blossoming love, the ink was of his wife sleeping with her mouth agape and snoring on a plane.

The 40-year-old McGraw said the tattoo was revenge for his wife once giving him a bad haircut. That tattoo seems a bit punitive for a bad haircut that will grow back in weeks. Remember how people were furious that a fictional husband gave his fictional wife a Peloton exercise bike in a commercial? This might surpass that outrage.

“I was doing a charity walk in Morocco walking the Sahara desert, and I got her to cut my hair,” James said. “On the back she’d messed it up completely.”

To get his revenge, McGraw went to his friend Gary Stephens, who is a tattoo artist. It took eight hours, which included McGraw asking the tattooist to add more chins to his wife’s image.

To make the big reveal, James wisely decided to expose his 37-year-old wife to her new “tribute” in public. He told his wife Kelly that he needed $390 for a tattoo and for him to bring the money to the tattoo shop. That’s when she saw her face permanently inked on her husband’s thigh.

“[The tattoo is] a lovely tribute to my wife – she’ll always remember it,” James said. “It took eight hours of pain. I was in her bad books for a little bit but she knows it was a joke. The fact I can’t stop laughing whenever I see her is making it worse. She still can’t believe I had it done.”

Kelly was “gobsmacked” when she saw her snoring face on her husband’s body.

“I was horrified. I couldn’t believe it. I hated the photo so much,” she told the Sun. “I just can’t look at it properly without laughing. It’s horrific, and he’s added more chins.” He added like five chins. This man had better take his wife off of his life insurance.

“He needs to watch his back because karma’s a bitch,” Kelly threatened. “I’ll think of something to get him back, but it’s going to have to be really, really bad to top that.” Not sure how anyone recovers from this with hiring a hitman.

“Every time I look at my wife now, I just laugh,” James said. “We’ve been playing pranks on each other for 24 years. This time, I pulled out all the stops – there’s no beating this.”

“I’m one-up at the moment,” James boasted. “I’m winning, but I’m quite scared to be fair. I don’t know what she’s planning next.”

James was asked by a friend if he was “out of the dog house yet,” and he replied, “yeah she sees the funny side now lol, I’m pissing myself at all the comments theres some real serious ppl out there with no sense of humor.”

Kelly gave birth to James’ five children, and this is how he repays her for one bad haircut. If he does this to the mother of his children, it’s a safe bet to never cross James McGraw.