Wild LA Police Chase Includes A Head-On Crash, A Random Person Handing Driver A Bottle Of Alcohol, And Ends When Someone Throws A Paintball At Windshield 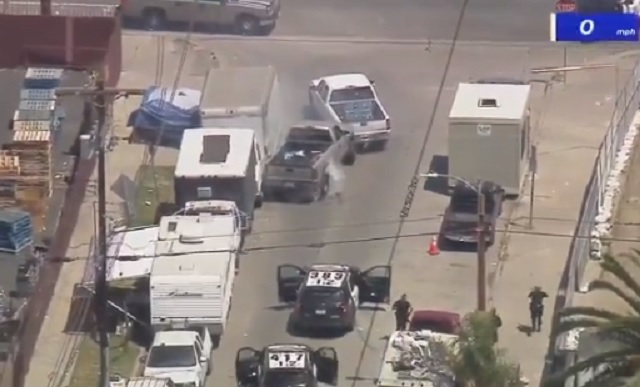 A wild police chase in Los Angeles captivated much of the country to start off Memorial Day weekend.

On Friday, a couple stole a pickup truck in the Los Angeles area and led police on a car chase that featured several crashes and ended when a good samaritan got involved.

A man and woman in a suspected stolen vehicle were taken into custody Friday after leaving a path of destruction across South Los Angeles during an erratic police chase in which multiple vehicles were damaged as the driver topped speeds of 100 mph.

It was not immediately clear when or where the pursuit began Friday morning, however, Scott Reiff said AID7 HD began tracking the chase in the Monterey Park area, where the driver of the pickup truck jumped from the 10 Freeway to the 110 Freeway, reaching speeds up to 100 mph.

The car chase had some intense moments which started when the truck spun out and started driving into oncoming traffic on the highway. The truck eventually hit a car head-on but thankfully the crash did not seem to cause serious injuries.

LA Car chase, Truck gets turned around, goes the wrong way on the highway, hits a car head on and continues driving pic.twitter.com/LaYzAaYciz

Later in the chase it appeared that a good samaritan tried to get involved to try and pin the truck but the driver was still able to get away.

this person does not want to be caught. pic.twitter.com/R0S3JPXyEc

The LAPD tried to blow the suspect’s tires out several times but the driver was somehow able to avoid the spike strips with this insane maneuver.

Police were later able to blow out one of the truck’s tires but the driver kept going. As the truck slowed to a crawl someone walked over to the driver and appeared to hand him a bottle of alcohol.

Random guy hands driver in the middle of a car chase a bottle of alcohol, the driver immediately chugs it….Def the wildest thing I've ever seen during a car chase (via @WorldWideWob) pic.twitter.com/BD4Tep7NGs

Minutes later another random person threw a paintball at the windshield of the truck which seemed to really impair the driver’s vision.

Someone throws paint ball at windshield of truck during LA car chase pic.twitter.com/RnBMYJZSSf

The chase ended when the man, who was wearing a sombrero, and his girlfriend jumped out of the car and were tackled by police.

LA Car chase ends when sombrero guy and his gf try to outrun the cops pic.twitter.com/gHAs5qRGd2

This high speed chase is South LA was everything! Spike strips, dodged being pinned in, paint filled can thrown at the car and ends with a ride-or-die chick holding him down until the end. It’s the official summer kick off in South LA