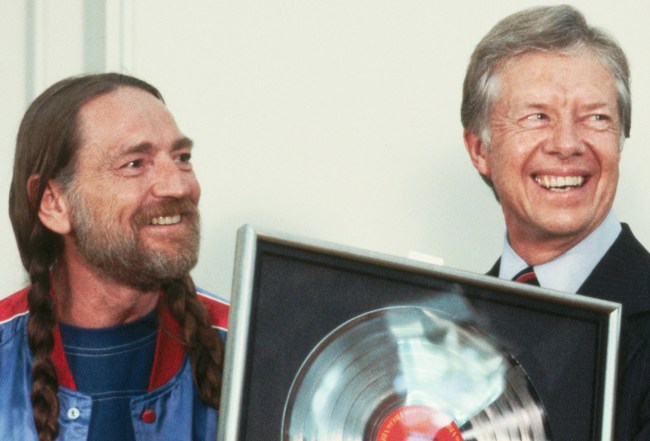 Last November, it appeared the End Times had finally arrived a few months before the burgeoning apocalypse it feels like we’re currently dealing with really kicked off when Willie Nelson—a man who’s arguably known more for his legendary weed-smoking abilities than a storied musical career that stretches all the way back to the 1950s—revealed he’d stopped sparking up at the age of 86 thanks to the toll decades of virtually nonstop inhaling had taken on his lungs.

As far as I was concerned, this unthinkable development was a violent disruption of the natural order that threatened to plunge the planet into chaos. Hearing he’d decided to abstain from marijuana was like waking up to discover the tides have suddenly stopped turning and the sun had failed to rise. If Willie Nelson could swear off weed just like that, what was there to stop sperm from simply opting not to make its way to an egg as it has since the dawn of existence? Sure, you might think that’s a bit of a leap but you’d be kicking yourself for ignoring the warning signs that were obvious in hindsight when the world finds itself with a Children of Men situation on its hands.

Thankfully, it didn’t take long for Nelson to clear the (noticeably less hazy) air and clarify he’d stopped smoking marijuana but was still taking advantage of the wide variety of other methods of consumption currently available on the market—some of which he arguably helped bring into existence, as the efforts he’s made to normalize the drug and push for reform over the years undoubtedly played a role in altering a landscape that’s changed dramatically as more states have legalized weed and made it easier for people to dream up new and innovative ways to ingest it.

Nelson had been advocating for many of the changes that have slowly been adopted across America since Colorado became the first state to allow recreational sales in 2012 and was an ardent supporter of Jimmy Carter, whose approach to regulation was somewhat conservative by today’s standards but who voiced his support for decriminalizing marijuana and eliminating the vast majority of prison sentences for people caught with it in their possession in favor of fines (an approach the federal government has still declined to take over 40 years later).

Nelson appeared alongside Carter on the campaign trail prior to his first and only presidential term and was even invited to perform on the lawn of the White House in 1980 (where he sang a duet with the First Lady). However, you have to wonder if that would’ve still been the case if the leader of the free world at the time knew what had transpired on the roof overlooking the grounds after he extended an invitation to Nelson a couple of years before.

September 9th will mark the release of Jimmy Carter: Rock & Roll President, a documentary examining his relationship with the many musicians he recruited to help further his election bid, including a couple (Nelson and Bob Dylan) he’d become lifelong friends with.

A trailer for the film recently dropped and features the former president recounting an anecdote that appeared in the 2008 biography Willie Nelson: An Epic Life, where the musician revealed he smoked weed on the roof of the White House with a member of the staff that Carter says was actually one of his sons.

It turns out this isn’t a particularly new revelation, as Celeb Stoner notes there were rumors the smoking buddy in question was the then-28-year-old Chip Carter, who Nelson says was actually the person who procured the joint they shared while gazing upon Washington, D.C. with a beer in hand. Five years ago, a writer for GQ reached out to Chip about the incident and he essentially confirmed he’d been Nelson’s partner in a federal crime committed on the top of the home that houses the head of the executive branch (who just so happened to be his dad).

I didn’t need any more proof that Nelson is one of the coolest dudes alive, but when you live a life as wild as his, you’re certainly not going to have any shortage of evidence.