REVIEW: ‘Without Remorse’ Is The Action Genre In Its Simplest, Most Enjoyable Form 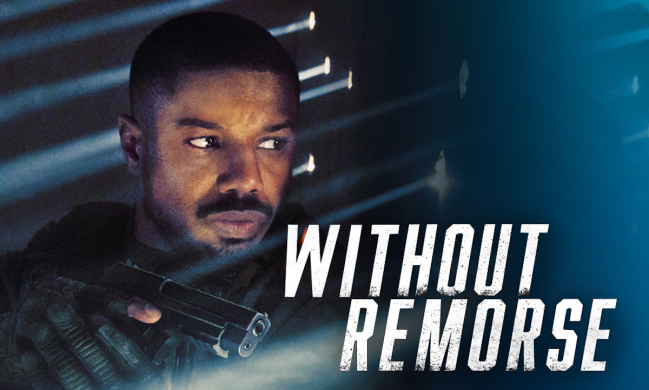 Here’s what’s fascinating about the idea of a “simple” action movie: there’s more than one type.

Whether it be “simple” like the Fast and Furious franchise, in the sense that not much intellectual thought is required to enjoy them, or “simple” like the John Wick franchise, wherein the concept itself is rudimentary (assassin must kill hordes of enemies). The new Michael B. Jordan-starring Without Remorse finds itself somewhere in between, with an injection of 90’s action-thriller inspiration to boot.

And that’s the best compliment I can pay Without Remorse, really: it reminds me of the mid-to-late 90s action movies I grew up with, fun and to-the-point. Just solid all around. Gritty hero in a dire situation. You know the ones: The Rock, The Fugitive, Mission Impossible, True Lies, Die Hard with a Vengeance — the list goes on and on. Without Remorse plays like a 2021 update of those modern action classics.

While Without Remorse comes with the universe-building you’d come to expect from a 2020’s blockbuster, the film’s efforts to flesh out the rest of the world, and the potential sequels, never feel intrusive. The story and the subplots of the film itself (perhaps the most basic an action movie has to offer: man seeks revenge for the murder of his innocent wife) remain compelling enough, though, largely in part due to the razor-sharp commitment and charisma of Michael B. Jordan. The dude is an absolute movie star and everyone else in the film — a lean, solid cast of supporting characters played by the likes of Jodie Turner-Smith, Guy Pearce, Jamie Bell, and more — knows it.

Speaking of MBJ’s John Kelly, he’s essentially the U.S. military, good-guy version of John Wick, as his sheer determination is his superpower, which is a plot construct that lends itself to slick, intense action sequences, something that Italian director Stefano Sollima (Sicario: Day of the Soldado) excels at. The greatest strength of Without Remorse‘s set pieces, the defining trait of any action movie, are their clarity, coherence, and conciseness — the cloth that is this film was cut with a scalpel. Brutal in nature but exacting all the same.

And that’s what makes Without Remorse the definition of a *good* action movie, its combination of elements old and new, the simple and the complex, the grounded and the fantastical. It blends to-the-point plotting with forward-thinking world-building, simple action-sequence constructs with expertly crafted set pieces, a grounded story with a nearly unkillable, almost otherwordly hero.

If you’re a fan of the action genre, whatever version of it that may be, you’ll enjoy Without Remorse. And if the audience turns up for it, then so will a sequel.

‘Without Remorse’ will hit Amazon Prime Video on Friday, April 30.

An elite Navy SEAL uncovers an international conspiracy while seeking justice for the murder of his pregnant wife in Tom Clancy’s ‘Without Remorse’, the explosive origin story of action hero John Clark –one of the most popular characters in author Tom Clancy’s Jack Ryan universe. When a squad of Russian soldiers kills his family in retaliation for his role in a top-secret op, Sr. Chief John Kelly (Michael B. Jordan) pursues the assassins at all costs. Joining forces with a fellow SEAL (Jodie Turner-Smith) and a shadowy CIA agent (Jamie Bell), Kelly’s mission unwittingly exposes a covert plot that threatens to engulf the U.S. and Russia in an all-out war. Torn between personal honor and loyalty to his country, Kelly must fight his enemies without remorse if he hopes to avert disaster and reveal the powerful figures behind the conspiracy.