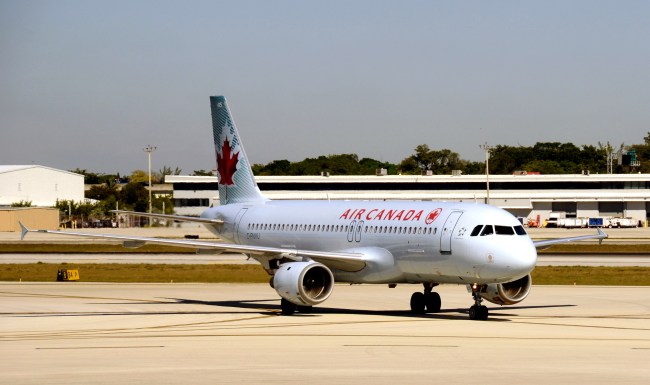 Panthers quarterback Cam Newton may have been disappointed that his offer of $1,500 to change seats with a man on his flight back to America from France, but at least when he arrived the flight crew didn’t just leave him on the plane when they left and locked it up.

Because that’s exactly what happened to Air Canada passenger Tiffani Louise O’Brien when she fell asleep on a 90-minute flight from Quebec to Toronto on June 9th.

O’Brien’s friend, Deanna Dale, was with her in Quebec City and dropped O’Brien off at the airport.

“I told her ‘Just text me when you’re landed or before you get home,’” Dale said.

Dale said it was around 11:45 p.m when she received a message from O’Brien saying she woke up and was alone on the plane.

Dale said she asked O’Brien if she could get off the plane, but O’Brien replied that she was locked in the aircraft.

Dale said she then received a FaceTime call from O’Brien but the call ended quickly. Dale said she tried several times to call her back and then contacted Pearson Airport.

“I said ‘My friend is trapped on the airplane, in the dark, locked in and she just woke up. I need someone to go and get her.’”

A panicked O’Brien said she reached the cockpit through the dark and found a flashlight and that she could see Pearson Airport from a distance.

At one point, O’Brien posted on Facebook, she did manage to get one of the plane doors open, but when faced with “a 40 to 50-foot drop to the pavement below” she decided another plan for escaping the plane might be needed.

Instead, she tried leaning out the door and making the flashlight reflect on the plane in attempt to get someone’s attention.

“When I see the luggage cart driving towards me I am literally dangling my legs out of the plane,” she wrote. “He is in shock asking how the heck they left me on the plane? I’m wondering the same. (When my seat an inch back or my tray down flight crew take notice but yet you missed a person still strapped into her seat and just all go on home?!?!)”

Air Canada says it is “still reviewing this matter” and has “followed up with the customer and remain in contact with her.”

“I haven’t got much sleep since the reoccurring night terrors and waking up anxious and afraid I’m alone locked up someplace dark,” O’Brien wrote on Facebook.

Think about that the next time you decide to catch a few Zzz’s when you’re on a flight.