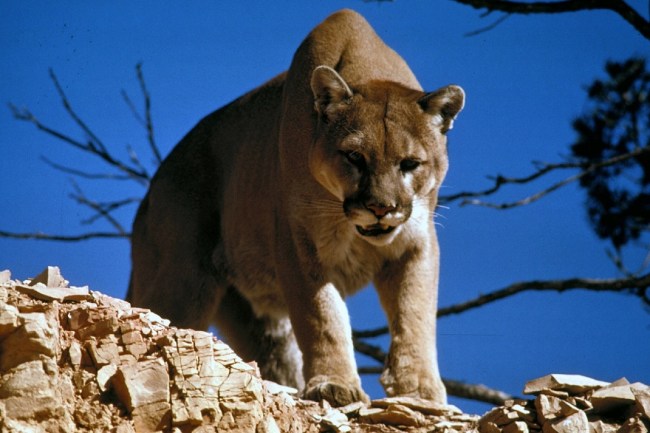 Mountain Lions are some of the most terrifying creatures in North America because their combination of incredible power and ability to stalk prey in complete stealth mode means they can pounce in an instant and take down just about anything that walks.

A Canadian woman was able to escape a nightmare situation by blasting Metallica‘s ‘Don’t Tread On Me’ after she was out on a walk with her dog and noticed a peculiar figure down the path. The color didn’t match the trees and she almost instantly realized that she and her dog were being stalked by a cougar.

That’s when she busted out her camera and began filming while yelling at the powerful cat in hopes that it would scare the mountain lion away. That didn’t work so she switched tactics and blasted Metallica’s heavy metal at the cougar.

The mountain lion was clearly in Seek & Destroy mode and it was only a matter of time before the Fade To Black if that cat attacked. It was likely going for her dog but it could’ve just as easily taken her life in an attack. In that instant where your life is on the line, Nothing Else Matters, but she was quick enough to think on her feet and blast some tunes from her iPhone.

Here’s the footage of the mountain lion stalking them from down the path with the full (intense) story below:

The story on Kelona Now is straight-up wild. I don’t really get the sense that this person thought her life and her dog’s life could’ve been taken in an instant because they were so collected throughout:

Their usual route takes them about five kilometres into the trees but Gallant said they only made it roughly two km in before they saw the animal.
“I looked over to the right and there it was, I couldn’t make it out at first and thought ‘oh that is a strange colour, that’s not a tree,’” she recalled.

It wasn’t until the predator was creeping toward them that she realized what it was.
“It was crouched down, doing that kind of prowl, predator walk that they do — that was when I waved my arms and yelled ‘hey, you stop!’ and it did.”
According to Gallant the animal “froze like a statue” keeping its eyes fixated on her and Murphy.

“Murphy hadn’t even seen it yet, he was just kind of sniffing around and didn’t know who I was yelling at or what was going on,” she said. “The wind was going in the wrong direction so he couldn’t smell it, which I am actually glad for because if he had, he would have started barking and likely charged it.”

She told Kelona Now that she initially wasn’t that scared and that she was more surprised to see a cougar 50 feet away. That quickly turned to ‘holy shit, I need to do something ASAP’ which is when she took out her phone to film the cougar approaching slowly and yell at the cat.

As you saw in the video, yelling ‘bad kitty’ wasn’t enough to scare away a powreful cougar.

That’s when she went for the noisiest possible thing she could think of:

Thinking quickly, Gallant took to her phone’s music library to try and find something that sounded the most human and most threatening, it was then that she landed on the track “Don’t Tread On Me” by Metallica.
“I thought it was the noisiest thing on my phone that would probably scare it, that was also the messaged I wanted to convey to the cougar,” she joked.

Once the song was selected, Gallant turned it up to full volume and faced it toward the cougar and luckily it worked.
“As soon as the first notes blared out it ran into the bush,” she said.

If you need a refresher on what ‘Don’t Tread On Me’ from Metallica sounds like, here you go:

Murphy told Kelona Now that after the cougar ran off she actually got a little more scared because it was then out of sight.

Before playing the Metallica she could at least see the cougar which I imagine at that moment gives some sense of control because you at least know when it’s going to pounce as it’s running full speed towards you. Once this cougar’s gone and back in the woods you have no idea if it’s still stalking you and/or if it’s going to charge at any moment.

For a full rundown of this story, you can click here.