Woman Viciously Shoves Anti-Gay Priest Off The Stage While Delivering Sermon In Front Of 50,000 People 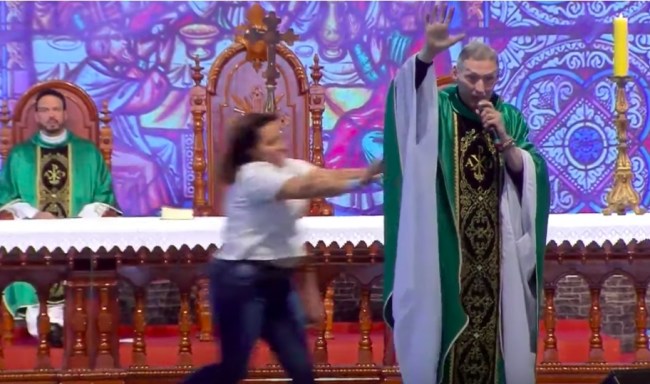 Marcelo Rossi, one of the most most well-known religious figures in the Brazil, nearly met his maker in front of 50,000 worshippers during a religious event in the area of Cachoeira Paulista, in Sao Paulo, Brazil.

A woman snuck past security and shoved the priest off-stage with mighty force. It was originally reported that the reason for the push was because Rossi claimed that “fat woman don’t go to heaven,” but more recent reports claim the 32-year-old woman had mental issues and just wanted to talk to the priest.

She sure had an interesting way of going about it.

The church said on Twitter that Rossi continued with the sermon as the woman was arrested, according to Metro.

A statement read: ‘The father has suffered an attack during mass. We pray for him. ‘Fortunately, the religious man has not suffered considerable injuries and was able to continue with the mass.’

It wouldn’t be inconceivable that the woman had motives outside of a lapse in mental health. Rossi hasn’t exactly preached total inclusion in the past.

According to The Christian Science Monitor, the priest said on Brazilian TV: “A lot of ideas will change the day homosexuality is proven to be an illness.”

These anti-gay claims jibe with Brazil’s self-proclaimed “proud homophobe” president Jair Bolsonaro, who said that he’d prefer his son to be dead than gay.

He told Playboy: “I would be incapable of loving a gay son. I prefer that he die in an accident.”

So it’s officially confirmed: Brazil’s president is a closeted homosexual. A monumental revelation. Congrats to the gays around the world!