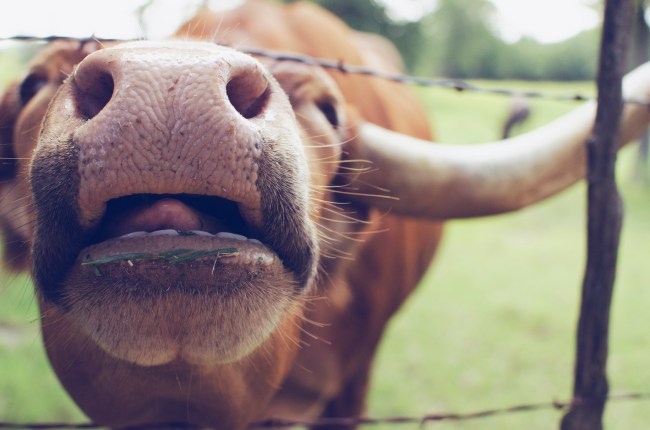 A Texas Longhorn raised in Alabama has set a new Guinness World Record for having the longest horns ever. They measure nearly 11-feet across from tip to tip.

I don’t know why it’s so amusing to me that Alabama beat Texas its own game and set a world record for the longest horns ever but it is. There’s just something funny to me about generations of Texans working their asses off at preserving this world record only to see someone from the Panhandle swoop in and steal the horned glory.

For the bulls, the horns can extend an average of 70-inches tip to tip and for the cows and steers, 100-inches isn’t out of the realm of possibility. The previous Guinness World Record for ‘Longest Horns’ was held by a longhorn named Sato whose horns measured 10-feet-6.3-inches across.

A 7-year-old Texas longhorn steer named Poncho Via who lives in Goodwater, Alabama is now the proud owner of that record with horns that measure 10-feet-7.4-inches from tip to tip. Watching this thing just try and go about life is amazing. The horns are MASSIVE.

Poncho Via was raised by the Pope Family in Goodwater, Alabama since they got him at 6-months old. They told Guinness they realized there could be a potential Guinness World Record on their hands when his horns started growing out instead of curving up like typical Texas Longhorns:

The Popes have been avidly following this record category for several years. Their “Could we have a record-breaker?” moment arose when Poncho was aged around four, after they noticed that their steer’s horns were not curving up like those of most longhorns, but instead growing straight out.

The family’s instinct that Poncho could be a record holder was borne out last month, when Guinness World Records approved the measurements of his rack. His horn tip span supersedes that of the previous record holder – a fellow longhorn steer called Sato, from Texas – by just over an inch.

Poncho’s owner Jeral Pope recalls the first time he ever set eyes on this striking breed: “My wife and I went somewhere out west, riding a hay wagon. Up on the hill, outlined against the sky, were three or four longhorns. They stood out like anything on the crest of that mountain – it was the prettiest thing. I told my wife, we got to have one of them.” (via Guinness)

I grew up in a dog family where every relative had dogs and they were obnoxiously proud of these dogs. It’s still this way. I cannot fathom the level of smugness that comes with raising a world record animal like this who is apparently the talk of the town with neighbors coming by to see the steer and bring him gifts on the regular:

Not surprisingly, Poncho has become something of a local celebrity in Clay County, as Jeral explained: “All my neighbours round here, any time they have company, they come over to see the longhorn. He’s just a big, gentle character. Everyone brings [food] with them – he likes apples, carrots and marshmallows.” (via Guinness)

Imagine being the family that raised an animal so peculiar that people come from all over to shower you with gifts. What the hell does that do to your ego? According to Guinness, the family seems pretty humble about it.

They say that Pancho has turned into a beloved pet over the years, and the county they live in is one of the poorest in Alabama. So now they have this one thing, a world record longhorn, for the community to come together and celebrate. This world record steer also sounds like a real trickster:

While Poncho has never hurt anyone with his horns intentionally, the unwieldy appendages have occasionally proven a liability – as Jones knows all too well. “One day, I was out fishing and Poncho came up behind me…” he begins to recount ruefully.

“He pulled a water bottle right out my pocket with his tongue. He’s there playing with the bottle and I reached and scratched him for a bit…
“That went on for a little while and I guess a horsefly got on him or something [because], all of a sudden, he turned that head and I went airborne into the pond! He just knocked me completely off my feet into the water.” (via Guinness)

I grew up around horses and was always at the barn but I know next to nothing about cows or their personalities but this one sounds like he’s a real trickster and full of personality.

There are more anecdotes and all sorts of photographs of Pancho over on the Guinness World Records website which you can check out by clicking that link.