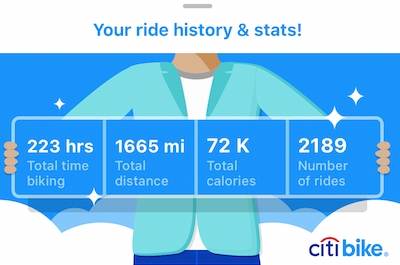 Sure, I’ve seen bigger. But not many. 72,000 calories. That’s like 35 cream pies (bakery not vaginal). 1665 miles? That’s like biking from Washington DC to Denver. These eye-watering stats were comprised of millions of tiny jaunts. A quick pedal to the gym here, a short trip down to the village for a show there. Next thing you know, I’m in the Citibike hall of fame.

I know my exact seat height by feel. I could set that thing in the dark. I know the fastest bikes (generation 3, with the small baskets and the numeric dial gears). I can tell from a glance how hard the tires are, how well she’s running, and whether the brakes are gonna hold. I’m a damn horse whisperer of citibikes. I even started wearing a helmet this year because of how much ground I cover on these puppies. Can’t be too careful, lotta rookies on the road now.

Despite the staggering volume of my Citibike resumé, I can count on one hand the number of times that I’ve left a bike unattended. Whenever I see someone’s bike sitting outside a coffee shop, I consider them a terrible owner. No cowboy would leave his horse untied outside the tavern, free to stamp and whinnie and wander down the street. Anyone who leaves a bike unattended is asking for it to be stolen.

But at the same time… who steals a Citibike? Is there a secondary market for these things? They’re not exactly good bikes. They’re tanks, commuter bikes, meant to be ridden slowly and for short trips. They’re the least aerodynamic bicycles you can find, and they’re usually beat to shit from the people who rent them for the day (as opposed to annual membership holders, like myself, who respect the code of the bike).

As luck would have it, yesterday was one of those rare days where I left the bike unattended. I needed to go into the UPS store to add more stamps to this big envelope I was mailing full of 1099s and paper that could ruin me in the wrong hands. With such sensitive material, you gotta make sure it gets to its destination. In the store, they told me I was one stamp shy, so I bought the stamp, affixed it to the envelope, and dropped it into their mail slot. I paid cash to speed things up and told them to keep the change—50 cents, no joke. I needed to get back to my horse.

I checked the time stamps from the footage. I walked in to the store at 4:27:14 and I walk out at 4:30:18. Three minutes and four seconds. In that time, this guy sat down on the bench, scoped out the scene, came over to the bike, lowered the seat and performed a maintenance check, and then casually walked away. He leaves the frame at 4:29:36, just 42 seconds before I walked out of the store. The perfect crime. Like Ocean’s Eleven when they only have a minute or whatever to do all the shit with the alarm down. Dude couldn’t have timed it any better.

It’s hard to call him a criminal mastermind, but I think we have to consider that. Especially when you observe how chill he is throughout this crime. He spends so much time setting the bike to his standards, and then he walks very slowly with it down the sidewalk. You hear thieves in movies say “act normal” but this dude is acting abnormally normal. If only any of the 40 women who passed him hadn’t been so buried in their thoughts and phones, they might have smelled something fishy.

Citibike is going to ding me $1200 for the bike. On the phone, I asked the operator if these bikes ever get returned to docks. He said nah, not really. I then asked if this guy was going to sell the bike, and he said “no, he’ll probably just… use it as his bike.” To me, that’s like stealing a taxi and using it as your car. Fair enough.

When the dust had settled, I spotted a few CCTV cameras under the awning of the bodega next door. I walked in and told the owner my story. Over the next hour, he and I scrolled through the footage—bent over his phone screen together, resting our elbows on the counter, telling other customers to fuck off—until we found the scene. He was one of the better dudes I’ve met. His name was also Mohamed Ali, which made me like him even more.

The only lesson I’ve learned from this? Don’t file your taxes early.