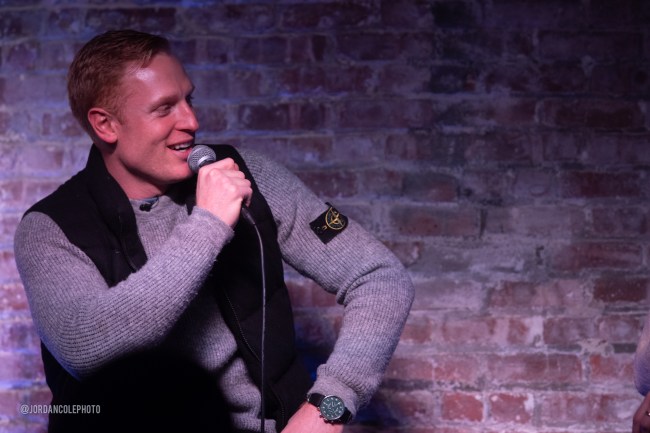 Last weekend, I dusted off the cobwebs and stretched my creaky joints (does one stretch joints?) to perform standup comedy for the first time in three months. As a New York City comedian, I’ve been accustomed to performing every night of the week for the past seven years. I don’t think I’ve gone longer than ten days without taking the stage to tell jokes since I withdrew from law school in 2013. As such, this recent quarantine-forced sabbatical has me, and many of my comedian friends, struggling to remember what it’s like to take the microphone and deliver material.

But at some point, you gotta dive back in baby. Two Maine comics I know asked if I wanted to trek up to Cambridge, Maine with them on Saturday night for a gig at a “brewery.” It sounded decent—they told me we’d get paid $100 each, they’ve done it before and the crowd was decent, and they were driving. I hopped in with a to-go box from some Vegan place in Portland that I’d only entered because I had to use the bathroom urgently, and off we went.

Maine is a weird state. Around Portland, where most people live, it’s liberal, educated, somewhat cosmopolitan. People care about the environment and the ocean. Sustainable fishing is a big deal. Portland, the state’s biggest city with 66,000 residents, is home to a strange breed of mountainous hipster. Bike enthusiasts with tattoo sleeves run coffee shops as usual, but they’re also square-shouldered and capable of breaking your jaw with a soccer kick learned in their weekly MMA class. Weed shops abound, and life is pretty good here.

Drive an hour northwest, and you’ll find yourself on a different planet. Most of the money in Maine lives by the coast, but the political DNA shifts dramatically as you move inland. We turned off the highway and found ourselves on backroads that dipped and wound through neighborhoods where more than a few houses had been burned to the ground. I’m talking houses that look like old campfires. Lawns that are covered with various kitchen appliances and car parts. Driveways with random-colored schoolbuses? Not yellow, no affiliation with a school district. You ever see a blue school bus? Not sure why you’d keep that around. Trees out back riddled with bullet holes. And obviously, Trump-Pence 2020 signs are stuck proudly in the front yard of every home.

These were the people who came to our show. Nothing wrong with that; I’ve performed for everybody. But as we neared our destination, I had to cycle through my set and discard a lot of the material I wanted to do. I flirted with an opening bit about comparing Cambridge, ME to my more familiar Cambridge, MA and even Cambridge, England, but I gave up as my buddy told me these people were likely unaware that there were other Cambridges in the world. The joke about engagement announcements on Instagram seemed unlikely to land. I felt like I was showing up to a gun fight with a “free hugs” sign.

I started to grow worried. I can smell a bomb better than a german shepherd, and this had all the makings of a trap show. But when we arrived, I had to laugh. This was our venue:

One side of the “stage” was the wire fence of a chicken/goose coop. One woman said “I’m so glad we never bought in to that social distancing bullshit.” pic.twitter.com/nJUci16lgJ

We were set to perform “out back,” among the picnic tables and, uhm, birds. We set up the PA system, which we’d brought ourselves, and were ready to rip until the clouds opened and it started to pour, sending us scurrying to bring the equipment inside.

Now, I didn’t take any pictures of the inside because I didn’t want to offend people. But to call this place a brewery is like when people call McDonald’s a restaurant. Or when you’d get an OTPHJ and say you got laid. To their credit, they made GREAT pizza from a true brick oven, and they were super nice. But they had maybe three beers on tap, and one of them was raspberry. I’m not a big raspberry beer guy. I didn’t even know you could make beer from raspberries.

The people were a treat. Meth is sipped like chardonnay in Cambridge, Maine, and dentistry falls under witchcraft and/or “dark arts,” and seems forbidden. Still, they were incredibly nice. Until we started performing. Here’s how it went:

I tell a joke. The crowd responds. Not with laughter, but with their thoughts. They would use a joke as a prompt, like in the SATs, for a conversation either among their table or… with me. They would engage me in conversation while I was trying to move forward with my set. The problem was, they were being extremely nice about it. These people were lovely! It’s just that they’d clearly never seen a comedy show before, and they thought it was a town hall meeting.

I had waited 90 minutes while the other comics went up first. That was part of the problem. By the time it was my turn, the crowd had checked out. But I think they were checked out the moment the show started. So I don’t blame the other guys.

At one point, a couple decided to leave. I should mention that we didn’t have a stage; we were simply standing on the floor, near the entrance. So as they walked out, they said goodbye to me, thanked me, and shook my hand. I thanked them and said goodnight. While performing. After 12 minutes, I gave up.

When the show wrapped, we went out back (the rain had stopped) and shared a few joints. I abstained given the pandemic, but I’d catch snippets of conversations where people scoffed at the coronavirus which—they seemed sure—was all bullshit. Driving home, my two comedian friends apologized for bringing me up and for the quality of the show. I told them not to worry, I’ve done worse gigs.

But then I started thinking. Have I done worse gigs? I once provided the “entertainment” for the sheriff of Bergen County’s reelection gala. That went poorly. 300 police officers and their wives with ZERO interest in, or awareness of, a comedy show unfolding. That’s a story for another time, but it had stood as my de facto worst gig ever.

The Cambridge, Maine brewery was worse. Definitely worse. I can’t even say I bombed. It’s more that I performed for 14 people who didn’t understand what was happening. Why was I talking to them?

Comics will tell you that an experience like that makes you stronger. I disagree. That night made me really appreciate the time I’ve spent not doing standup. It’s been blissful, frankly. I look forward to the day when I can take the stage in New York City again, surrounded by my close comedy friends, in front of discerning comedy audience, with great lighting and sound.

Who knows when, or if, that day may come. Worst case, I can always head back to Cambridge, Maine.