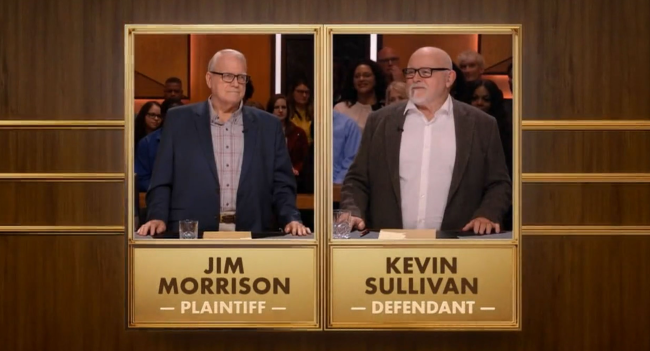 Old school wrestling fans couldn’t believe their eyes when two legends of the business showed up and were pitted against one another on Judge Steve Harvey.

In other related news, Steve Harvey is now a judge apparently. Is there anything that man cannot do?

The last time many wrestling fans saw J.J. Dillon and Kevin Sullivan square off was on WCW Monday Nitro.

This week, however, J.J. Dillon (real name Jim Morrison) met Kevin Sullivan in the courtroom of one Judge Harvey.

Did not expect to see JJ Dillon and Kevin Sullivan on Judge Steve Harvey pic.twitter.com/UAPfBowLmH

The dispute between the two pro wrestling legends apparently stemmed from Dillon claiming that Sullivan owed him $7,500 for a boat loan.

The 40-year friendship of JJ Dillon and Kevin Sullivan is on the verge of collapse on The Steve Harvey Show. pic.twitter.com/u9u5Uiw4y1

In the end, His Honor awarded the money to Dillon.

Judge Harvey gave quite a speech when delivering his verdict

“I rule in favor of the plaintiff for $7,500,” said the judge. “But because of what you gentlemen have maintained for over 40 years, because of your friendship and love for one another, because you share a bond — you’ve given folks hours of priceless entertainment.

“I can’t tell you how much wrestling been in my life, man,” Harvey continued.

“On behalf of this court, even though we awarded you the $7,500, the court is going to pay the $7,500. You will get your money in full. And I want to thank the both of you for coming in here and for being honorable men. And for loving and defending your friendship no matter what.

It’s okay if you tear up watching this.

Many wrestling fans, while they may not have shed a tear, were more than a little shocked to see J.J. Dillion and Kevin Sullivan in front of Judge Harvey.

JJ DILLON IS SUING KEVIN SULLIVAN ON JUDGE STEVE HARVEY I HAVE SO MANY QUESTIONS WTF pic.twitter.com/4d6OWIO33n

When people blame me for ruining the territories and the business, know this: without me, all wrestlers would be fighting like hell in retirement on the Judge Steve Harvey Show for a measly $7500. pic.twitter.com/nYqSXXVpnl

Lol Steve Harvey is a judge now too? When did that happened? https://t.co/JYEvg17Ei0