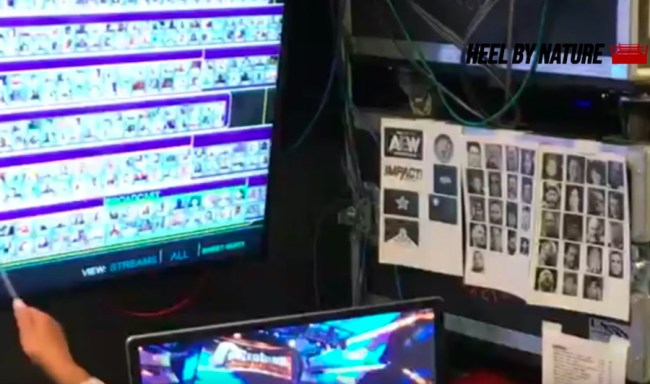 In August, WWE debuted the ThunderDome concept at the Amway Center as a way to mask the fact that arenas were still empty due to Covid-19 restrictions.

In conjunction with The Famous Group, and its proprietary technology, WWE was able to “virtually bring fans into the arena via live video on massive LED boards.”

Overall, ThunderDome has been a success, but not without a few human glitches. Early on during the ThunderDome concept, WWE dealt with multiple instances where inappropriate content was shown during TV broadcasts. The company was forced to issue a statement after a fan showed a KKK rally video during an episode of Monday Night RAW.

Since those instances, The Famous Group has been more diligent with constantly checking what fan images make the air. In an effort to remember images that are strictly forbidden on WWE TV, producers keep a sheet of “banned images” nearby.

The Famous Group won an award for its ThunderDome concept and released a highlight video showing just how much work goes into delivering virtual fans to the WWE. In that video, fans caught a glimpse of the “banned image” list and the names and logos listed are quite fascinating.

HeelByNature was able to grab the video and screenshot of the banned image list before it was edited and republished and fans were able to decipher the names associated with the photos.

Many of the names and the reasons behind the ban will be obvious to most wrestling fans. AEW, IMPACT, and New Japan are all considered rival promotions.

Enzo Amore was fired from the WWE in 2018 after rape allegations surfaced. The charges were later dropped. Amore did show up to the Survivor Series 2018, as a fan, but was removed from the building after causing a disturbance.

The CM Punk ban is interesting considering Punk seems to be on good terms with WWE after returning to do “WWE Backstage” in 2019.

Marty Scurll is/was a performer in Ring of Honor but his status is unknown at the moment pending an investigation into Speaking Out allegations made against Scurll.

WWE continues to ignore the existence of Chris Beniot and has all about erased him from the company’s history.

Jim Cornette is a lightning rod for controversy and extremely critical of the WWE product on his podcast, “The Jim Cornette Experience.”

Former WWE Diva Ashley Massaro alleged that she was sexually assaulted at a US military base during a WWE tour of Kuwait and that” WWE apologized but persuaded her to not report it to the appropriate authorities.” Massaro committed suicide in 2019.

“Superstar” Billy Graham has held a grudge on and off against the WWE for years. His recent issue being WWE stars being banned from doing his podcast.

Former WWE star Ryback – real name Ryan Reeves – is currently in a legal battle with the company over his name.

WWE’s issue with the flags of Hong Kong, Taiwan, and Tibet is unknown.