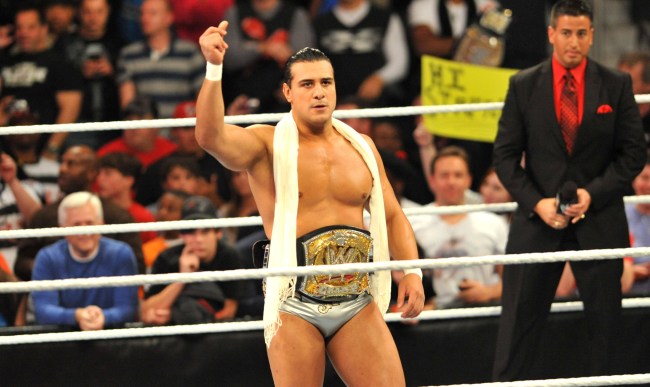 Former WWE wrestler Alberto Del Rio (real name Jose Rodriguez Chucuan), who was arrested on multiple kidnapping and sexual assault charges back in May, has officially been indicted in Texas.

The Bexar County District Attorney’s Office announced on Friday that the three-time WWE champion was indicted by a grand jury on one count of kidnapping and four counts of sexual assault related to the case.

The 43-year-old Del Rio, a nine-time world champion overall counting his work with Impact Wrestling, GFW Global, AAA and CMLL, was arrested in San Antonio, Texas in May after his ex-girlfriend (no, not Paige, though the two of them also certainly had their moments together – such as the time he was stabbed) told police that Del Rio smashed her cell phone and her laptop, attempted to burn her passport, hit her in the head several times, choked her, punched her in the back, tied her hands with boxing straps, shoved a sock in her mouth, and sexually assaulted her for several hours, leaving her with multiple injuries as a result of the more than 16 hour attack.

Del Rio, the first Mexican-born world champion in WWE history, also allegedly had assaulted her multiple times previously and threatened to take the woman’s son and “drop him in the middle of the road somewhere.”

TMZ reports that if convicted, Del Rio would face a maximum sentence of 99 years in prison on the felony aggravated assault alone.

Del Rio could face a minimum of two years in prison if convicted of one of the four counts of sexual assault. Under second degree felony, he could face a fine of up to $10,000 as well as potential incarceration.

Concerning the kidnapping charge, if punished in the first degree under Texas law, Del Rio could see a minimum of five years and a maximum of a life sentence in addition to a fine up to $10,000. However, if he’s able to prove that he released the victim voluntarily, Del Rio could be convicted for aggravated kidnapping that ranges from a 2-20 year prison sentence and face up to a $10,000 fine.

He is expected to be arraigned sometime Friday.

Del Rio, who is also a two-time WWE United States Champion, most recently competed in MMA, losing via first round submission to UFC Hall of Famer Tito Ortiz in December 2019 at Combate Americas 51: Tito vs. Alberto.

Love wrestling? Check out our podcast “Not About Wrestling” where we talk to the biggest stars in the sport today about everything except wrestling. (OK, and some wrestling.)