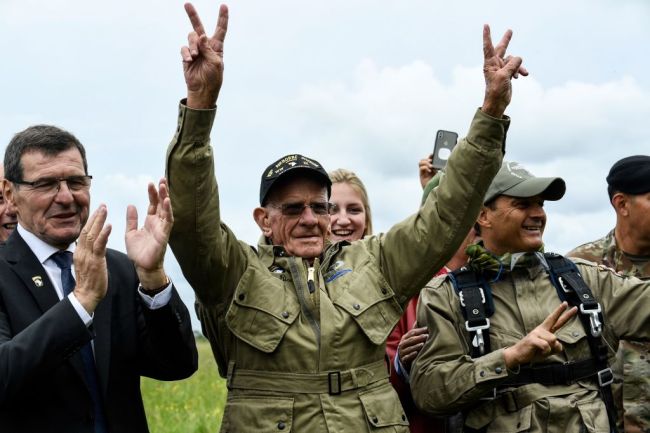 World War II veteran Tom Rice celebrated his 100th birthday on Sunday by going full-send. The San Diego-native, along with U.S. Navy parachute team the ‘Leap Frogs’ jumped out of a plane to commemorate hitting the century mark.

Rice is no stranger to leaping from planes. His heroism goes back to 1944 when he, at 22 years old, parachuted onto the beach in Normandy on D-Day.

This time around, instead of gunfire, Rice was met by a huge crowd cheering for him on the beach. They met him with rousing renditions of “Happy Birthday” and “God Bless America” as he floated to the landing area, lined with American flags.

Had the pleasure of befriending Tom Rice today on his 100th birthday. The WW2 veteran celebrated by jumping out of a plane at @delcoronado. @CBS8 pic.twitter.com/ODCAED83sU

World War II veteran Tom Rice is celebrating his 100th birthday by parachuting onto the beach in College Coronado pic.twitter.com/xYXgOtJwp2

It was just before noon when Rice landed on the beach, with the iconic Hotel Del Coronado in the background. After coming to a safe landing, Rice thanked the crowd and paraded around in an ATV with local lifeguards.

Have to share the event that I saw today. Veteran Tom Rice, a former WW2 Paratrooper, celebrated his 100th birthday by jumping out of a plane and landing at the @delcoronado where I happened to be. Here are a couple photos, one being from the interview for the news. So inspiring! pic.twitter.com/cwkyZeBJrA

Even at 100 years old, Rice is full of energy and moves like a sprightly young man. He even trains at a Crossfit gym a few times a week.

D-Day paratrooper, Tom Rice will celebrate his 100th birthday with a skydive, honoring those who weren't as lucky to have survived. You may wonder how he is doing this? Rice does CrossFit twice a week at CrossFit Coronado.#crossfit pic.twitter.com/043xX1LMlU

When asked about the secret to his long, healthy life, Rice said to “keep moving!”

“It’s [an excitement that is] not going to leave me for probably the next three or four months,” Rice said. Legend.