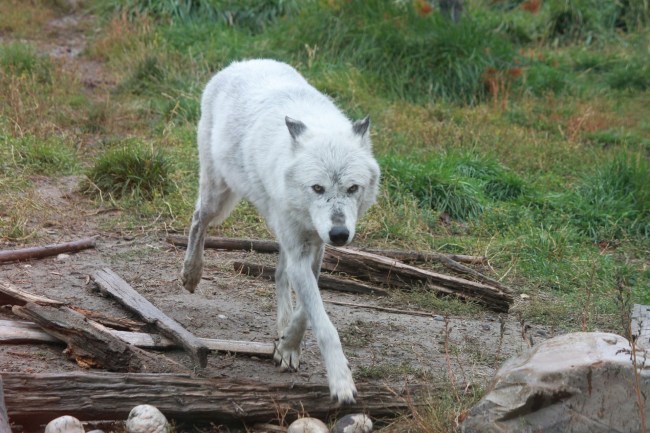 A tour group Yellowstone National Park witnessed an incident that a crew from Planet Earth would’ve killed to see. An entire pack of wolves threw down with a grizzly bear who held his own (her own?) until eventually being ran off by the wolves, likely because there were some wolf pups in the area and they were being territorial.

I count at least 14 wolves, possibly more. All going up against a single grizzly bear. And I’ll be honest, I thought this wasn’t going to have a great ending for the bear. I was worried that I clicked play on footage that ended with me seeing a bear getting eaten but the bear makes it out safely after the heated battle between both sides.

According to MSN, this footage was captured by Adam Brubaker of the Tied to Nature guide service and was filmed last Friday on a Yellowstone tour with four tourists in the group. You can see the bear running and it’s said this is an acknowledgment to the wolves that the bear’s aware of the situation.

The video was shared on the Tied to Nature Facebook page as well as their YouTube channel:

There are an estimated 94 wolves in the Yellowstone National Park and as of a few years ago there were a total of 528 wolves in ‘the Greater Yellowstone Ecosystem’ floating in and out of the park so this really was a surreal sighting as these two alpha species rarely cross paths like this.

I’ve never seen wolves in the wild, at least not that I know of/remember. A few years back I came across a massive coyote eating a deer carcass in the middle of the road up in the Adirondack Mountains in upstate New York and I’m convinced that it was so big it couldn’t possibly have been a coyote but I can’t imagine the thrill of seeing an entire pack of wolves like this in the wild.

Shout out to reader Bryan for sending me this story yesterday on Twitter!