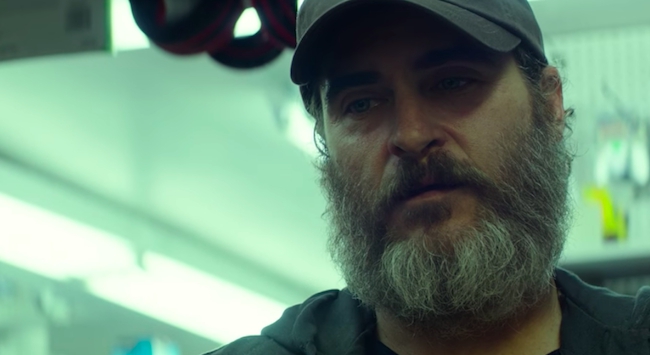 Amazon has made it its mission to disrupt virtually every single aspect of our daily lives, so it opened its own movie studio a few years ago in an attempt to go toe-to-toe with Hollywood. Its films have been met with mixed reviews— with the exception of The Big Sick and the Oscar-winning Manchester By The Sea— but most of the films they produce haven’t really piqued my interest— at least not until now.

The trailer for the studio’s newest film— the Joaquin Phoenix vehicle You Were Never Really Here— just dropped, and if you’re a fan of movies where a person with a bunch of weapons and a particular set of skills hunts down bad guys who’ve kidnapped someone’s daughter, get ready to get excited.

The last time I saw a stoic hitman extracting vengeance on the evildoers of New York City was when John Wick decided to ruthlessly (and efficiently) kill a bunch of henchmen, and while I doubt You Were Never Really Here will be able to match the body count of the second movie in the series, I’m certainly curious to see how people will be at the receiving end of a ball-peen hammer in this movie.

The film started building buzz after Phoenix won the award for best actor at the Cannes Film Festival and its director, writer, and producer took home the trophy for Best Screenplay (which was adapted from a novella of the same name). It currently has a score of 88% on Rotten Tomatoes, which is more than enough to make me want to get my ass off the couch and see it in theaters.