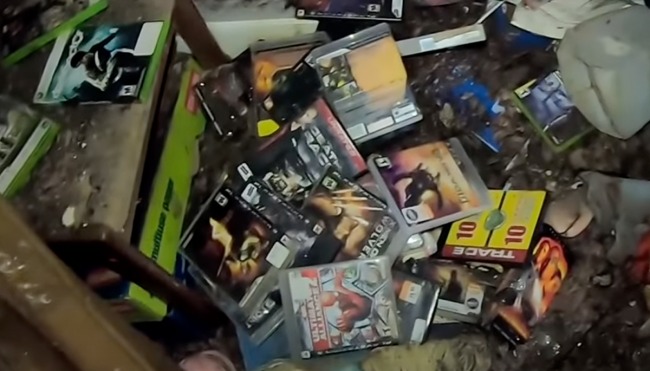 In 2019, a sealed copy of Super Mario Bros. became the most valuable video game ever sold when it netted a little over $100,000 at auction. That record was broken when another copy of the NES title fetched $114,000 the following summer, but that sum was shattered this April when an unopened cartridge that spent 35 years chilling in a desk was flipped for a staggering $660,000.

As a result, it’s safe to say there’s a bit of a market for pristine video games, and as a quick glance at the eBay prices for sealed cases of NCAA Football 14 shows, you don’t need to have a mint copy of a beloved retro platformer to make a pretty penny.

Of course, most people buy video games with the intention of playing them, so it’s pretty unlikely your average gamer is sitting on a goldmine. However, the same cannot be said for the collection amassed in the home of a hoarder that recently received a visit from a couple of YouTubers who stumbled upon a jackpot.

According to Kotaku, the duo behind the Cheap Finds Gold Mines YouTube channel were invited to take a look inside a house that’s been slated for demolition and got a bit more than they bargained for when they arrived at the filthy abode that was previously home to a hoarder who compulsively collected a wide variety of items—including the hundreds of video games scattered around the dwelling.

Over the course of three videos, the pickers documented a hunt that required them to sift through piles of junk teeming with mouse poop, cockroaches, and the brown recluse spider that bit one of them during the search. However, it seemed to have paid off, as they were able to get their hands on a number of titles—both sealed and unopened—for GameCube, Xbox 360, and various iterations of the Playstation they say were worth close to $100,000.

In the video recapping their adventure, they invited a collector who dropped $3,000 for some games from their stash—including Max Payne and Half-Life 2—and also chatted with a fellow treasure hunter they divvied up the prize with, who walked away with sealed copies of Kingdom Hearts 2, Splinter Cell, the original God of War, and a variety of other titles totaling $7,000.