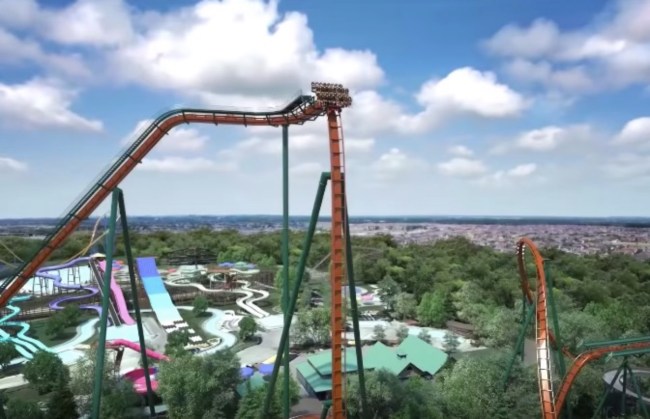 The Yukon Striker will open up in just a little bit over two months from now and it will become the world’s fastest ‘drop’ roller coaster. To ride this coaster you’ll have to head north to the Canada’s Wonderland theme park in Vaughan, Ontario which is actually less than a 4-hour drive from Detroit.

The roller coaster measures 3,625-feet long and will reach a maximum speed of 81MPH. All I can think about is the ‘Black Fly’ season of early Summer when those enormous bugs are out and how miserable it would be if you were flying along on this roller coaster at 81MPH and caught one of these huge insects in the face. That would sting like hell.

This will be the world’s tallest, fastest, and longest dive coaster and one that’s all but certain to have roller coaster enthusiasts worldwide traveling to this park. Here’s a first look at this outrageous roller coaster ride with a 90-degree drop through an underwater tunnel:

This will be the third tallest roller coaster in all of Canada. The other two taller coasters can also be found at Canada’s Wonderland theme park, but this is the world’s tallest, longest, and fastest ‘drop’ coaster with that 90-degree drop through a tunnel.

I wouldn’t say that I’m the biggest roller coaster guy in the world but that’s mostly because I’m not a huge fan of theme parks. Something about standing in line for hours surrounded by sweaty people isn’t exactly my idea of weekend fun. But this coaster sounds legit, and it’s supposed to have amazing views of the Toronto skyline which is a city I visit every couple of years so I can definitely see riding this coaster in my future. If and when that happens, I’ll be sure to report back here.

Toronto bros, are you stoked for this to open this May? I know that Toronto in the Summer is one of the greatest cities in North America so I have to imagine a portion of that time spent outside will be at the theme park, right?