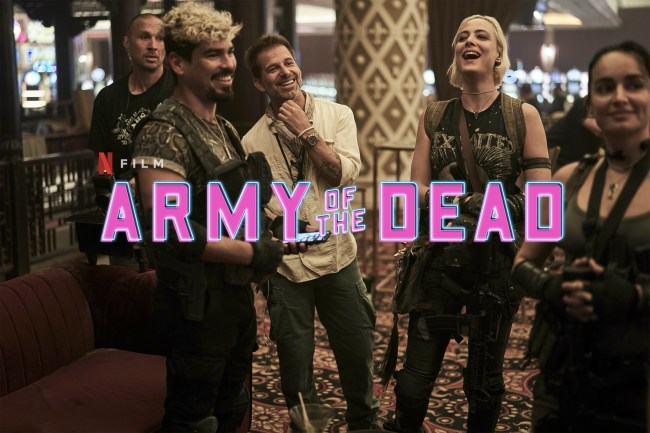 If there’s one aspect of Zack Snyder’s Army of the Dead you notice when watching the trailer (and the movie, for that matter_ — other than the insanity of zombie-filled Las Vegas, of course — it’s how wonderfully eclectic the cast is, which features the likes of Dave Bautista, Ella Purnell, Omari Hardwick, Ana de la Reguera, Theo Rossi, Matthias Schweighöfer, Nora Arnezeder, Hiroyuki Sanada, Tig Notaro, Raúl Castillo, Samantha Win, Huma Qureshi, and Garret Dillahunt.

The cast of Army of the Dead is so sprawling and diverse that it presents a sort of chicken-or-the-egg scenario, as it left me wondering whether Snyder built the characters around actors he wanted to work with or vice versa.

In an exclusive interview with BroBible’s Post-Credit Podcast, we asked the Army of the Dead director that exact question, leading Snyder to reveal that he actually cast actors based on the characters he created.

BroBible: Let’s start with the cast. Wide-ranging cast. Did you build the characters on actors you wanted to work with or vice versa? And how did you go about crafting this sprawling cast?

Zack Snyder: It was a bit of a vice versa, I would say. But each of them sort of got customized a little bit based on who we then got. You know, I always imagined the Scott character, David Bautista’s character, as being a little bit older than Dave, but Dave totally works as the dad in this movie because you don’t bat an eye, but I think originally he was named Scott after Scott Glenn.

ZS: Yeah, this story has been around for a while, and Scott’s a good friend and a great inspiration, but I’ve been talking to Dave, we’ve been trying to look for a project, and this came along and I was like, “Wait a minute, Dave is perfect for this.” Also because there’s a little bit of– he’s this big, physically capable, like a soldier/warrior, whatever, but also really vulnerable, and having to really open himself up to us. And that was a thing that I thought that Dave will do a great job at.

Make sure to read, or watch, our full interview with Zack Snyder, where we discuss all things Army of the Dead, the zombie genre, Man of Steel 2, Batman’s psychology, and more. We’ll also be releasing the interview in podcast form on Friday.