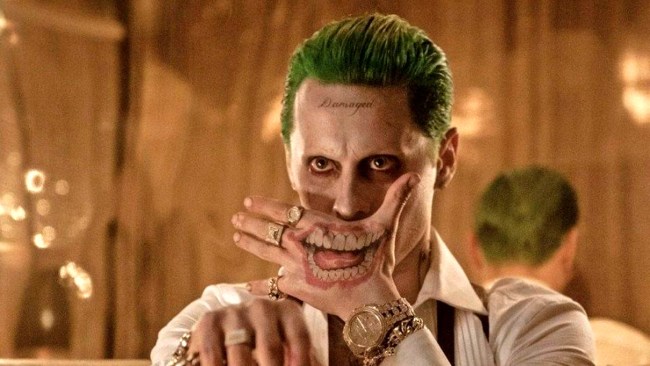 When the DC movie Suicide Squad came out in 2016 it didn’t get many great reviews. Fans and critics enjoyed Margot Robbie’s turn as Harley Quinn, but Jared Leto’s Joker was almost universally reviled.

Then, in 2017, when DC’s Justice League was released, it too received a plethora of negative reviews, putting the DC Film Universe which was supposed to include standalone movies for The Flash and Cyborg in jeopardy of completely falling apart as Ben Affleck’s Batman continued to underwhelm audiences.

So what does Zack Snyder think is a great idea for his upcoming re-cut version of Justice League? Adding Jared Leto’s Joker into the film so he can have some sort of confrontation with Ben Affleck’s Batman. GENIUS!

In an interview in the latest issue of Total Film, Snyder explained his logic for this move.

“[Adding the Joker] was a thing I had wanted to do because frankly, the ultimate conflict in a universe where Batman exists is for him to confront Joker,” said Snyder. “I was afraid that if this was the last Justice League with Ben [Affleck’s Batman] and Jared, it would be remiss if I couldn’t figure out a way for them to come into conflict.

“Also, it was a wish of mine to bring Joker into the continuing storyline. I hinted at it in Batman v Superman – when you see Batman’s gun in the post-apocalyptic world, it has a Joker playing card taped to it. This has a little bit to do with that concept.”

On the plus side of this equation, the many ridiculous tattoos that Leto’s Joker had in Suicide Squad appear to be gone.

Snyder told Vanity Fair when asked about the missing ink, “I would say that there’s been some water under the bridge. Who knows what’s happened. I don’t know if he’s wearing makeup, I don’t know what’s happening. It’s hard to say exactly.”

As for one of Leto’s Joker scenes with Affleck’s Batman, Snyder said, “It’s Joker analyzing Batman about who he is and what he is. That’s the thing I also felt like fans deserved from the DC Universe. That is to say, the Jared Leto Joker and the Ben Affleck Batman, they never really got together. It seemed uncool to me that we would make it all the way through this incarnation of Batman and Joker without seeing them come together.”

Okay, we have to give him that. It did seem kind of stupid that Batman hadn’t run into Joker yet, but this Joker? Fingers crossed he’s better than he was in Suicide Squad.