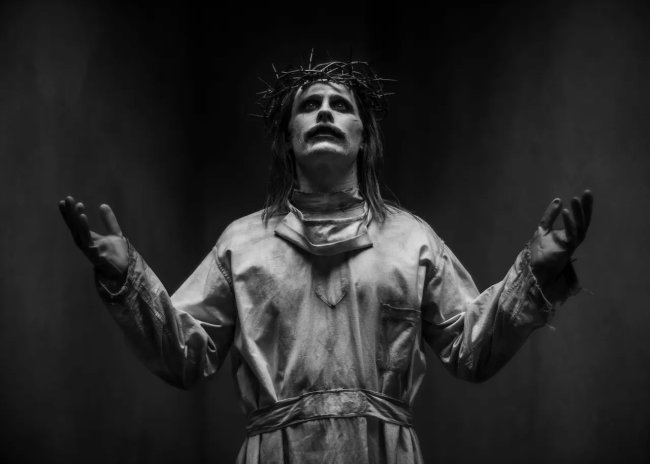 I’m going to put this as simply and as succinctly as possible: Zack Snyder needs to be arrested and jailed immediately, as this man is a criminal. Not quite literally, of course, but spiritually: this is an assault on the senses of all mankind and he needs to be stopped.

If we don’t stop him now, there’s no telling what horrors he might commit next. He’s already got Batman violently massacring people left, right, and center — who’s to say he won’t arm Superman with an AK-47 next? Give Alfred an Irish accent while he’s at it.  Turn Mr. Freeze into Mr. Frozen and have him terrorize the streets of Gotham City by simply karaoke-ing “Let It Go” on repeat.

Zack Snyder and Jared Leto are basically criminals at this point.

It’s a shame, too, because those original teaser photos of Leto back in the Joker make-up were actually pretty sick, especially since the character had finally been freed of those god-awful tattoos from Suicide Squad. But, man, everything since — from the “We live in a society” to this deeply flabbergasting Jesus photoshoot — has done nothing but blunt anticipation for the film. It’s two steps forward and one step backward with this guy. Oh, you thought the new trailer looks sweet? He’s Joker turning into a living meme, sounding as though he’s speaking with a bunch of pebbles in his mouth. Oh, you thought those first-look photos were cool? PSYCHE! Check him out with a Crown of Thorns! Serves me right, too — I’d practically been the Leader of the Anti-Leto-Joker Union, and as soon as I let my guard down and pay him a fucking compliment — I’m repaid with meme-dialogue and Catholic iconography.

Even still, despite this truly head-scratching photo-op, I remain excited for the prospect of Zack Snyder’s Justice League, as I’m someone who thinks Man of Steel is excellent and that Batman v. Superman: Dawn of Justice is better than its reputation.

RELATED: A History Of ‘We Live In A Society’

At this time, The Snyder Cut is set to be released on HBO Max on March 18. However, given that Snyder himself seems to be single-handily trying to trigger the apocalypse with his promotional material, let’s see if we even make it until then.