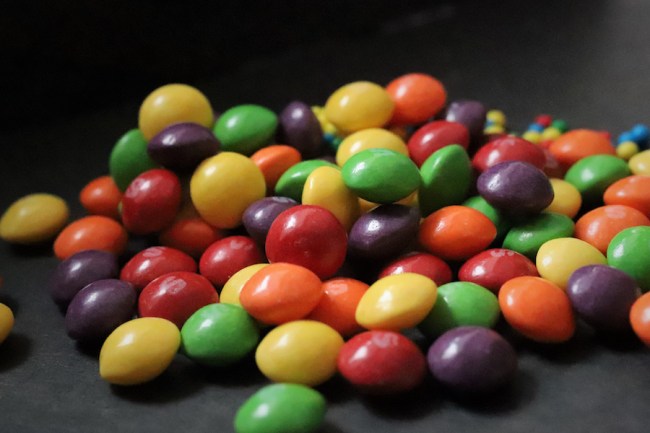 Every week, my kids come to me with a new candy request. My gateway drug to sweets were Saturday morning cartoons but the kids get peddled new confections in the middle of MrBeast and Unspeakable videos.

Typically, the kids beg for sour candies, then hold a competition to see who can shove the most in their mouth without vomiting. Hey, whatever keeps them quiet in the backseat.

I never really read the candy packages, I just buy the requested candy, so I totally relate to this mom who bought Zombie Skittles without realizing what makes these Skittles different than typical Skittles.

Much like Emily Massingill, I’d assume Zombie Skittles were Halloween themed and put no more thought into the little balls of fructose.

Zombie Skittles are essentially a joke candy. A majority of the bag is filled with delicious, normal Skittles, but one lone Skittle tastes like, in Emily’s words, “54 dirty diapers in the garbage.”

Her kids would complain that the Skittles tasted bad and now she obviously feels awful about forcing her kids to eat weird candy.

“If you’re feeling like a bad mom today, don’t worry,” she wrote on Facebook. “I fed these skittles to my kids for a solid month not realizing there is one skittle in there that taste like rotting flesh or 54 dirty diapers in the garbage. They kept telling me they didn’t like the skittles, and I told them to either eat them or they wouldn’t get any more candy ever again if they’re gonna be ungrateful.”

Naturally, the internet had to come after Emily for a million different reasons, forcing her to edit her post twice.

“Editing to add now this has blown up which is insane to me: I don’t give my kids candy EVERYDAY. But for a month, when they did get candy, this is what they got. they only went through about 6 packs or so. Also, for all of you that say I’m a horrible parent and ruining my children’s lives, my Venmo is @emilymichellephotos if you wanna contribute to their therapy fund for later in life. They’ll need the best due to this incident, I assure you.”

“Edit edit; “wHy WoUlD yOu MaKe YoUr KiDs EaT sOmEtHiNg tHeY dOnT LiKe?” It’s skittles not horseradish, sit down, listen to yourself. The ones I ate were fine, unfortunately for my kids.”

I’m completely on Emily’s side because I’ve been in her shoes. You buy something for your kids, they don’t like, but you give it to them because you’re not going to throw it away.

Lucky for her, those are individual bags and Halloween is coming.